I don’t know how this got past me, but it brings together two things I love: LEGO and the US National Parks. I actually found out about this project while in the gift shop at Mammoth Cave National Park in central Kentucky just a few days ago during my family’s annual road trip. They had a postcard-based ad for it at the checkout counter, so it’s really cool to see the USNPS getting behind the proposal! 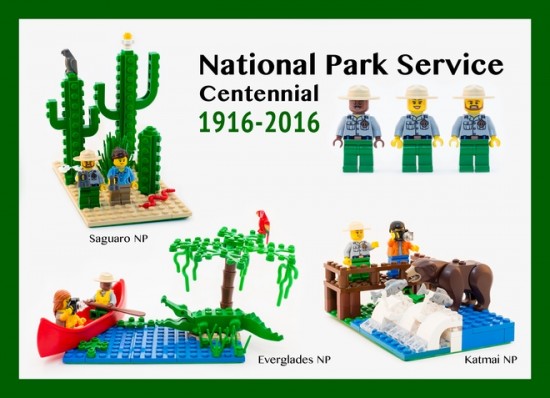 At the time of writing, the proposal has 5,708 supporters, so just a bit over half-way to fully achieving 10,000. If you haven’t already, please lend your support to this great idea so we can all bring a little piece of these incredible places home with us.

Having been to about ten National Parks myself, I can imagine the daunting task of boiling down some of these incredible vistas into a small vignette, but so far the project creator, Gavin Gardner (AKA LegoRanger16) has done a great job with the three depicted above: Saguaro, Everglades, and Katmai as well as some additional vignettes revealed in the “Updates” section of the proposal, including the Independence National Historic Park (home to the Liberty Bell), Assateague Island National Seashore, Death Valley National Park, Hawai’i Volcanoes National Park, Yellowstone National Park, and Clara Barton National Historic Site.

What about you, have you been to a US National Park? Which one is your favorite, and how would you depict it in LEGO form?

To support this proposal go to https://ideas.lego.com/projects/96402