The LEGOLAND California Resort will be opening its latest attraction known as the 4D LEGO Ninjago Film – Masters of the 4th Dimension. This will open first on January 12 at LEGOLAND California followed by additional openings at LEGOLAND Discovery Centers nationwide in America. The film lasts for 12 minutes. See below for the full press release. ( : 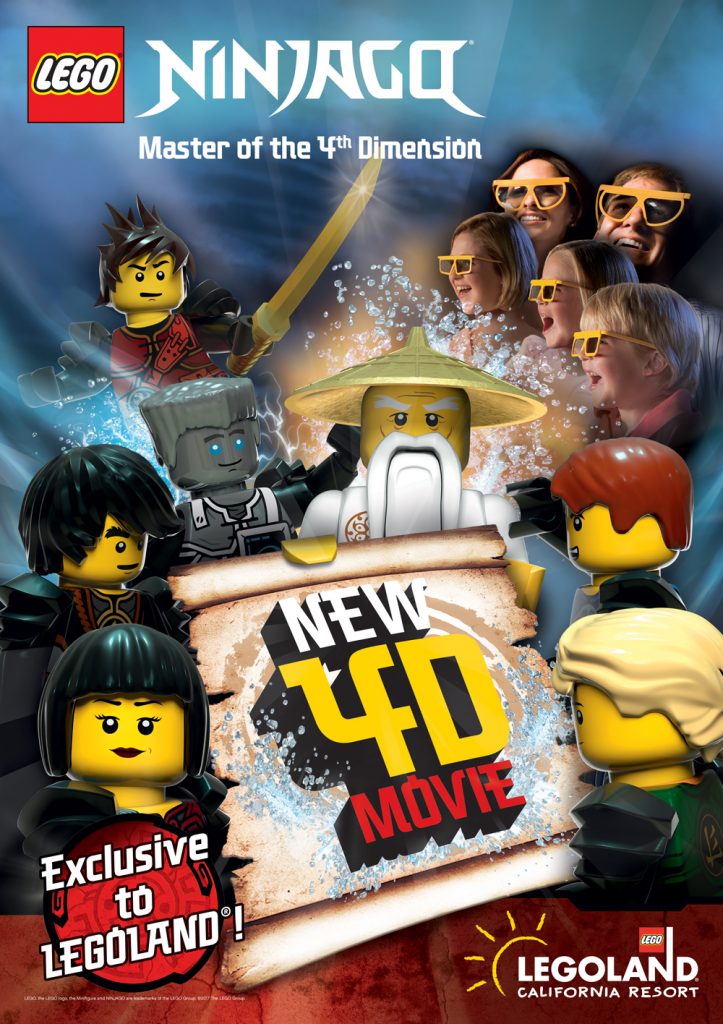 CARLSBAD, Calif. (January 3, 2018) – Ready, set, NINJAGO® time! The new 4D film, “LEGO® NINJAGO® – Master of the 4th Dimension”, opens exclusively at LEGOLAND® California Resort on Jan. 12 and will roll out at LEGOLAND®  Parks and LEGOLAND® Discovery Centers nationwide throughout 2018. The 12 minute, 4D experience will play throughout the day at LEGO Showplace Theater in the Park.

Kids can join their favorite NINJAGO heroes at a very special dojo training session exclusively at the family theme park! Guests can become part of the 4D action as Master Wu prepares the ninjas to take on the teachings of the mysterious ‘Scroll of the 4th Dimension’ but disastrous consequences strike and Kai, Nya, Lloyd, Zane and Cole find themselves in a whole heap of trouble for not only them, but the whole universe!

In celebration of the all new 4D animated adventure, the weekend continues with LEGO® NINJAGO® Days Jan. 13 & 14. Guests are invited to join in the LEGO NINJAGO fun at the family theme park and meet some of their favorite LEGO NINJAGO Movie characters including Lloyd, Sensei Wu, Kai, Jay and Nya. Kids can also participate in activities such as a scavenger hunt in Miniland U.S.A. and put their ninja gaming skills to the test while playing the brand new “The LEGO® NINJAGO® Movie” video game.

All activities are included with the price of admission into LEGOLAND California Resort. For more information, visit www.LEGOLAND.com or call (760) 918-LEGO (5346).