Forum member dr_spock has made a LEGO creation based on the articulated railcar made by Stadler of Switzerland.

GTW (Gelenktriebwagen) which means articulated railcar is made by Stadler of Switzerland. The notable feature is a power module in the middle connecting the two passenger cars. The design reminds me very much of the LEGO monorail sets like the Airport Shuttle. I wonder if the designers at Stadler were inspired by LEGO monorail. I chose the German DB colour scheme which looks similar to the LEGO airport shuttle colours.

Read more about his creation and check out more pictures in the LEGO Cool Creations Forum! 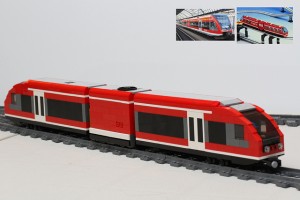