Discuss about retailers that carries LEGO products here! Got a LEGO Product Find or Polybag Find from a store? Share it with us. It can be a new or even a really old retired set!
Post Reply
13 posts • Page 1 of 1

There are three different builds according to my information.

I suggest getting there early as lines for these events have been HUGE since the LEGO movie came out.
Why do we drive on a parkway and park on a driveway?
Top

Thank you and day marked

Okay, those are awesome looking. They need a container to store "guts," though.
Top

What's really impressive is that some of them contain Mixels joints!
ALL HAIL THE BLACTRON EMPIRE!

Don't all of them contain Mixel joints?

Does anyone know what the part is on the front (chest) of the middle model? I've been able to figure out the rest of the parts (I think!), but am at a loss on that one.

^Yes, you're right, I hadn't noticed the forearms on the middle one. The piece on the chest looks to be some sort of sprocket gear, probably technic - possibly this one (although it looks to be light stone gray in the pic and BL only has a listing for dark stone gray): 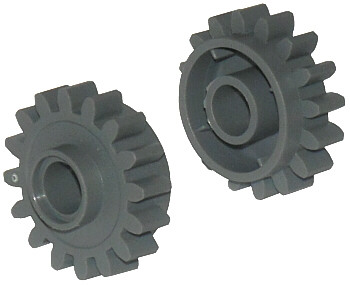 ALL HAIL THE BLACTRON EMPIRE!

I now remember finding that and trying to figure out if the images are color challenged or if this is a new color for this part. When inventorying the rest of the parts, some of the parts that look light are not available in light, but are in dark. Sigh... We'll see what is actually available.
Top

My kids are so excited for this.
Top

We stopped by around 12:15 and it wasn't too crowded. They gave you a bag and you just took random pieces. They didn't have instructions and we were trying to figure out what we needed to make one of them. It was kind of difficult. My child decided just to bring them home to build since there was no more room at the table. I suppose the benefit of doing it there was you could go back for missing pieces. The TRU lady was a little freaked out that they didn't have a pick list of parts for people as the line was taking a bit longer than normal.

I'm glad the photos are here so we can try to recreate one. It still was free LEGO, which is cool.

We just got back from one too. Our first Lego event. It was not too busy, so we sat down and tried to build one of the figures. However, the lack of instructions seemed to annoy my 5 year old. So, eventually, we grabbed the bag and went home. Decent way to get cheap/free bricks, I guess ;)
Top

Got there at 2, employee was bagging up rest of pieces into "sets". She gave one to both my kids and gave me one after I asked. Cool pieces, including micro joints.
Here is what was in the bag.
image.jpg
You do not have the required permissions to view the files attached to this post.
I have inoperable cancer and am unable to work. Any gifts would be appreciated. Thank you!
Top

I went with my kids at noon, and they were just telling everyone to take as much or as little as you wanted, and build either here or at home. Two of my kids stuffed their bags to the brim with parts and another filled theirs over halfway. I told them to put most of it back because I didn't want us to be inconsiderate and the employees watching said "Go for it, it's to build whatever you want." They offered a bag to my youngest and myself, but I politely declined because I wanted to make sure there was enough for everyone. It was definitely one of their better builds, that's for certain, and the parts are great. I had never seen the female hair mold before, and my kids made off with about 30 heads. They had hundreds and hundreds of heads, and another box filled with more of each part under the table yet to be opened, so they were well stocked. They always have a lot left over after these events at my store, so they let anyone who wants to participate, as their all time high for one of these was around 50-60 people, and they usually average half that. The staff told me they are sent enough for at least 100 people, so that's plenty of leftovers!
Top
Post Reply
13 posts • Page 1 of 1