I don't have an image of the box myself, so here's one from brickset. It's a beautifully done box, with fantastic detailing and scenery.

The set had two instruction booklets, as is standard for sets of this size. One is actually small, about the size of that for a 20 dollar set. It's for the car.
Building Experience
I've had more fun builds, but 50 dollar builds are always good. It's regrettable that there was an unstable section (it made the temple take almost half as long as the sphinx due to constant re-placing (yes, not replacing, but placing them again) the parts). The car was fun, but not particularly amazing. The sphinx was a fun build, although it wasn't as complicated as I had previously thought.
Set 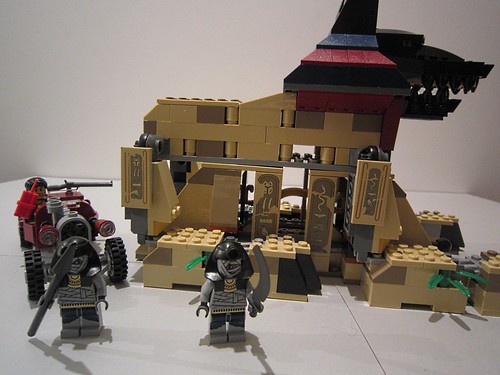 7326 Set
The set is pretty big-it's composed of a sphinx, temple, and car. 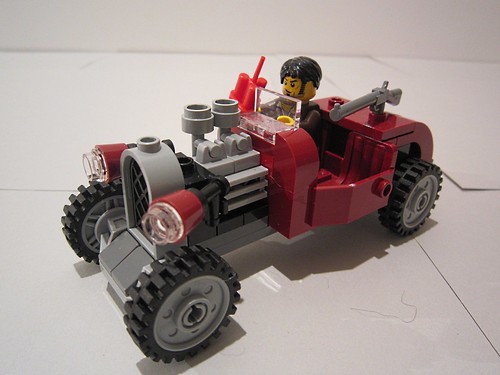 7326 Car Side
The car has a fabulous engine, with very nice details. The front section leaves a bit to be desired-there are two cheese slopes just sitting there and the 2x4 TECHNIC piece is barely attached, and has a tendency to fall off. The fez hats are a very nice touch-they are used as lights, but also make for nice minifigure accessories. 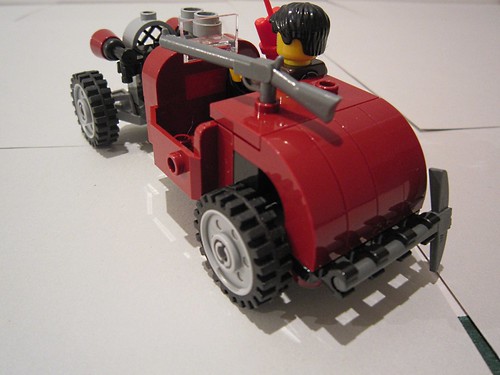 7326 Car Back
The back of the car is simple, with some slopes and other pieces. A pickaxe is carried in back. There is also a gun "mounted" on the back section, but there is no one to shoot it. 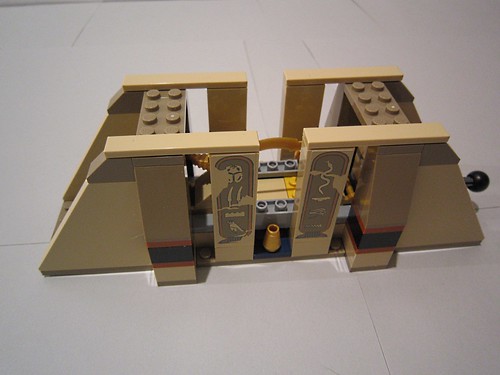 7326 Wall Side
The temple is a bit drab-it's also hard to build. The reason for this is not complexity, but strength-it falls apart extremely easily before you places the 2x6 plates and 1x6 tiles. The stickers are annoying, although they're very good looking. 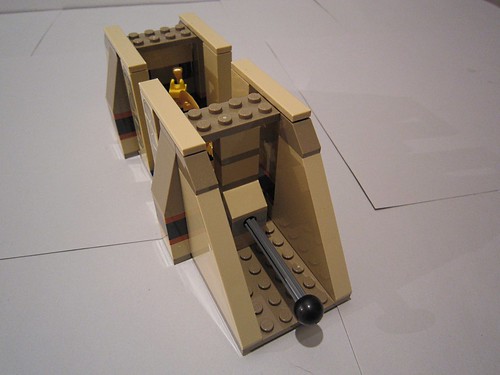 7326 Function
The temple has a mechanism for launching the golden sword's altar-simply push. Doing so will knock over a loosely attached wall (similar to the one in 7327) and "launch" the sword. Due to weakness of structure, there is a tendency for this to break the temple if done too hard. 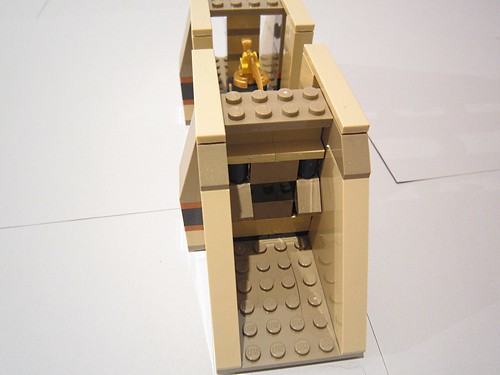 7326 Wall
The wall that falls is detailed and works. It pops out cleanly, but it also looks good when in. 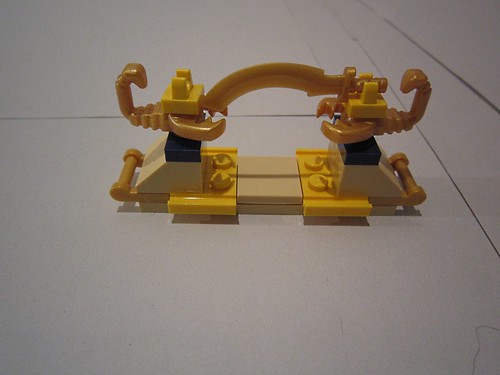 7326 Treasure
The altar is one of the best parts of the set. You get some sliding 1x2s, golden scorpions and handles, and a golden sword. 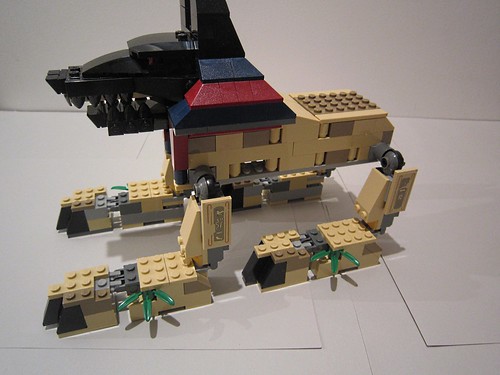 7326 Sphinx
The sphinx is very stable and well done, but has a few problems. First is the side-there's a gap there for no apparent reason. 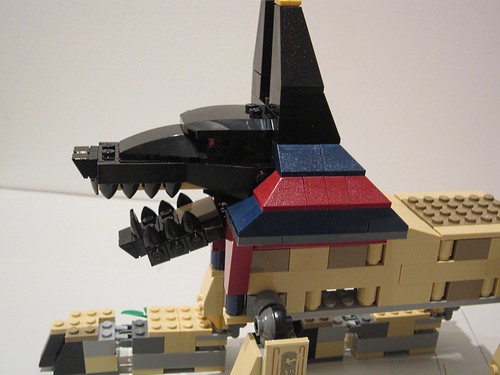 7326 Head
The other issue is naming. A sphinx is a cat, not a dog-yes, it has to be a dog/jackal to fit with the idea of Anubis' powers, but it can't be a sphinx. The same thing was done in a previous Adventurers Egypt set. Otherwise, the head is perfect. It's the best part of the set-everything fits together, mouth even opens and closes. 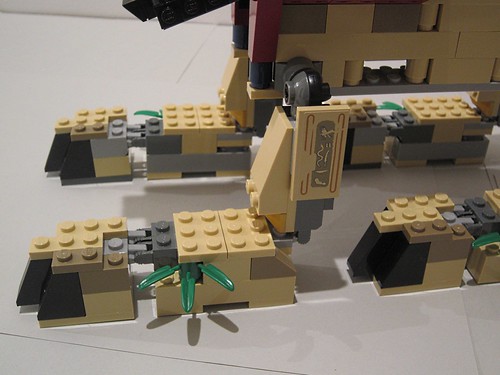 7326 Legs
The legs aren't extremely special, but they aren't drab either. They work and are solidly built. The only real issue is that the plant pieces are too large-when in a lot of positions, the plant will bend. Oh yeah, and there's a sticker. 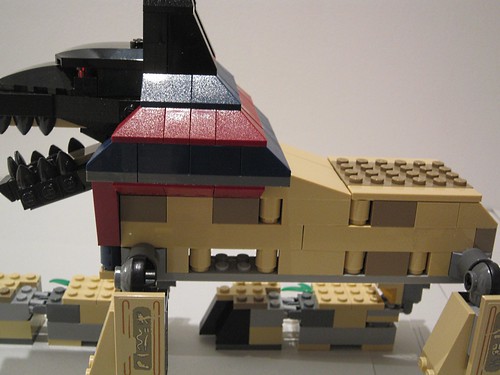 7326 Side
The back is detailed, and allows the head to flow nicely into the body. 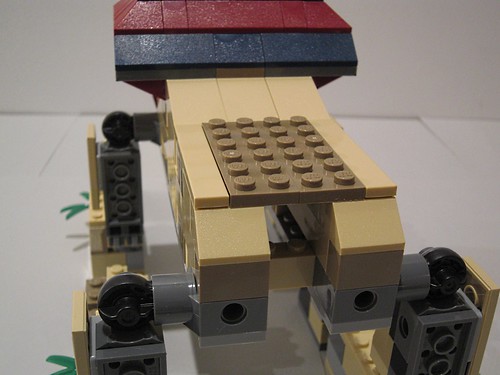 7326 Back op
I'd say this is the sets biggest flaw. It's not the most visible one by far, but it's big. There's a big hole there with no purpose or function whatsoever. 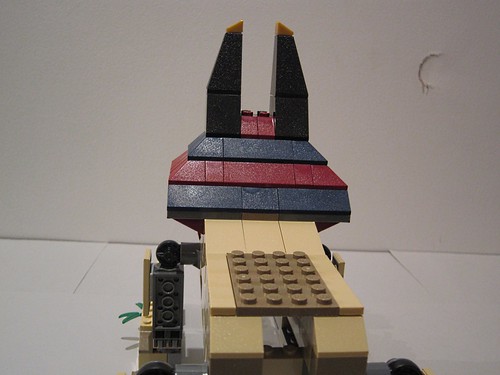 7326 Back
The headdress section fits nicely between the head and the body. The alternating dark blue and dark red work fantastically.

Parts
For such a large set, the Sticker Sheet is surprisingly small. Sadly, there are no printed parts.
The set comes with 18 black teeth (modified 1x1)-not an uncommon color for them, but nonetheless, a very good amount.
You can never have enough of these cheese slopes either-whether in black of gold.
Some of the large slope bricks include a black convex slope brick, and the newer, smaller, black 2x1x2 slope, the younger brother of the 2x1x3 slope. Other slopes include a large number of small convex slopes in dark red and dark blue, a few 2x4 slopes in the same colors, some dark red arches, and inverted slopes.
For minifigure accessories, the most notable are the new space gun and the fez hat, as well as the Kopesh.
Some new SNOT bricks appear in this set-the most notable is most definitely the 1x1 brick with stud on side. 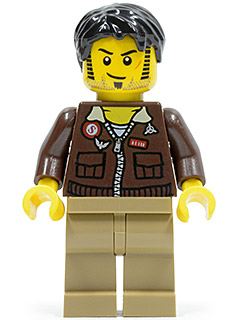 Jake Raines is fantastic, not only does he have an awesome face, with sideburns, 5 o' clock shadow, and other features, but he has a very detailed jacket.

The Mummy Warriors are also fantastic-they're simple, yet they make for a great army. My only qualm is the head-the LEGO Company only prints the front and back of heads nowadays (they used to do the whole thing sometimes), so there's a little grey without printing visible on the headgear. This is most annoying on figures like the pumpkin from monster 4, which has unprinted sides. But I digress. Their accessories fit them perfectly, and their headdresses do as well.
Images taken from Brickset database.
Price
This set has a very nice quality that stands out among recent sets. It costs half a cent less than 10 dollars per part, while every other set from Pharaoh's Quest costs substantially more than 10 cents per part, as do most Ninjago and Police sets from 2011.

Rating
Parts: 5/5-you get fantastic parts-while not as good as 7327 for parts (it's half the price), it's still a fantastic set for parts and has numerous parts in great quantities
Minifigures: 5/5-again, fantastic
Build: 4/5-you have some oddities here and there, as well as structural instabilities
Set: 4.5/5-the faulty parts of the sphinx are not very noticeable, but they're still annoying
Price: 5/5-fantastic, especially for 2011.
Overall: 4.7-a very good score-it was worth the money.

I got this set instead of the Temple of Atlantis-when I went to the LEGO store, all Pharaoh's Quest sets other than the sphinx were sold out, and all the 2011 Atlantis was as well. So I got this and the Winter Village Bakery to make up for the "loss".
MOCpages Account
FlickR Photostream
I post a lot of reviews in the reviews forum! Check them out!
Top

There shouldn't be a hole on the side you are missing a brick there. I liked the set but was not too happy with the car. The front is very flimsy but it does look nice. I also dislike the placement of the rifle but overall it is a fun set.
Top
Post Reply
2 posts • Page 1 of 1

Users browsing this forum: No registered users and 26 guests