hatcher wrote:I hate to be "that guy" but your entry appears to have stickers on it. I thought the rules said stickers weren't allowed? I guess we need a ruling here.

Those stickers came from the Ninjago Ultimate Sticker Collection book. I believe since it is an officially licensed book that it would be okay to use? Or does the rule mean only stickers that come IN a Lego set?

Things get out of hand at the Avengers Christmas Kegger! 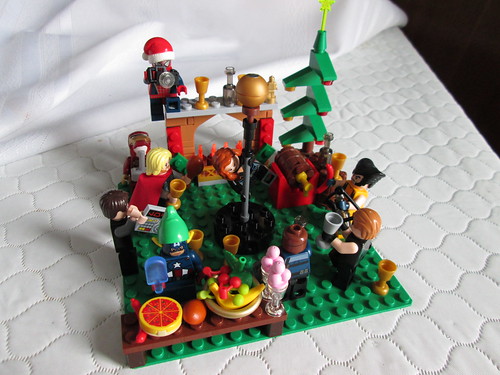 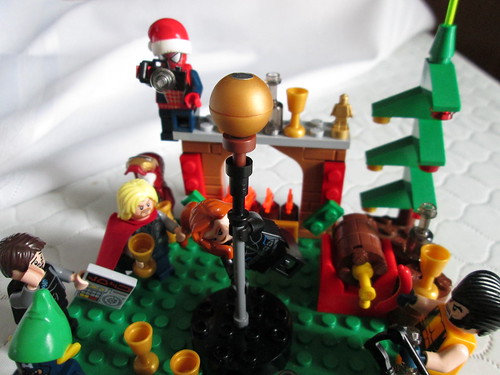 Check out my photostream set for 5 other pictures and some more details about what's going on.
http://www.flickr.com/photos/hatcherman ... 187376693/" onclick="window.open(this.href);return false;
Who is General Failure and why is he reading my hard disk?
Top

Every year the evil ice rangers conspire to kidnap the princess of the kingdom and hold her in the ice dungeon at the top of evil ranger mountain's red tower. There they sit around the campfire and tell stores of the great riches they are going to enjoy when the king pays their ransom. As the night wears on, they tire of stories and drink, and fall asleep by the fire. While the kidnappers sleep, the knights of the realm scale the mighty mountain into the icy keep. There they valiantly free the princess from her frozen cage and sneak away, dashing the hopes of the evil rangers once again.

The knights are from the newest castle sets, rangers and princess are from the lego store build your own minifigure station.The build took me four nights to get just right. There are zero exposed knobs in the entire build, which required me to get creative with things like the entryway of the red tower, but I liked the final look. I was a bit disappointed with the brightness of the push button light up brick I used for the campfire, which is really only visible in pictures taken in poor light, but otherwise I think it came out well More pictures are available at : http://flic.kr/ps/2LhSVm

Thanks for your consideration, Stephen 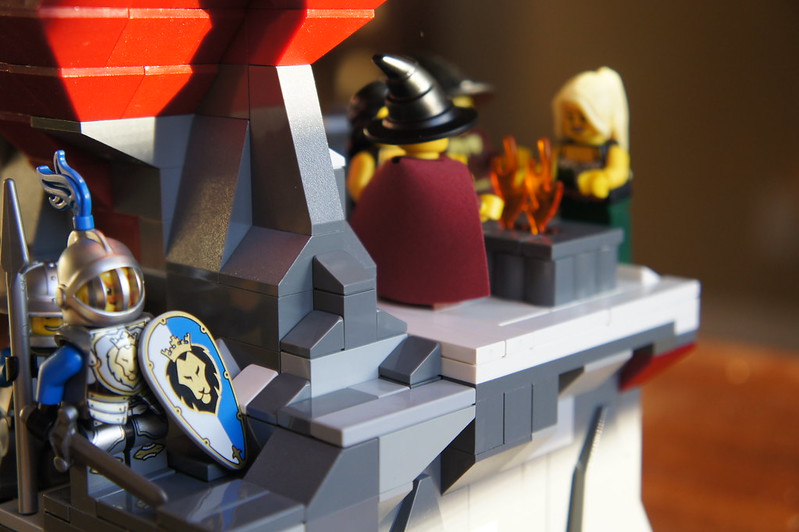 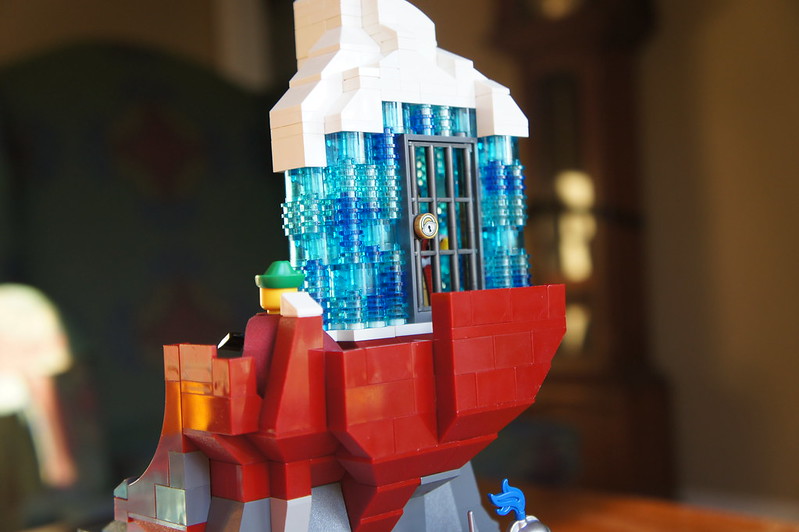 Title:
Hulk and Frosty the Stoneman

IMG_0001.JPG
IMG_0002.JPG
You do not have the required permissions to view the files attached to this post.
Top

The Elf has captured the Gingerbread men to bake himself a yummy holiday snack, but Indiana Jones is coming to their rescue!
You do not have the required permissions to view the files attached to this post.
Top

The astronauts of Futuron (1987 -- 1990) are celebrating Christmas. The mistletoe and wreath have been hung, the Christmas tree (constructed from radar dishes) is up, and the support pylons have been decorated with Christmas lights. Christmas lists are being finalized, cards are being delivered, and some astronauts are off to visit friends and family. The communications array (which is motorized and rotates) has festive red and green signal emitters. The bow isn't up yet -- they're still looking for the perfect location.

This YouTube video shows how the communications array rotates and highlights the festive features of the model: https://www.youtube.com/watch?v=t2bZm2DLyT4

FullHeight.jpg
Mistletoe.jpg
You do not have the required permissions to view the files attached to this post.
Top

The Monster Fighters got together for the holidays to enjoy some of Ms. Vampyre's Bat stew... Unbeknownst to them Lord Vampyre was about to drop down the chimney with a surprise of his own.... 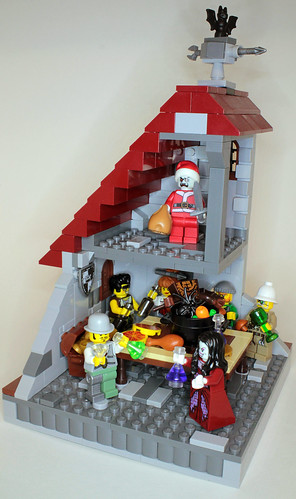 good luck to everyone!!!
thank you for looking!!!!
and thank you LEGO and Toys N Bricks for making all this happen!!!!
Top

Title: Scary Christmas to All, and to All a Good Fright!
Theme: Monster Fighters

With the Monster Fighters now captured and subdued, the Monsters enjoy a jubilant Christmas get-together at Lord Vampyre's Haunted House.

On the top floor, Lord Vampyre and his brethren enjoy some fresh beverages and festive camaraderie as Santa Claus looks on from atop the Christmas tree.

On the middle floor, a lost elf in search of his beloved Kris Kringle encounters a horde of zombies who, at the beckoning of the mistletoe, are quite eager to welcome the little fellow with a barrage of kisses.

On the bottom floor, the Witch and Zombie Chef are charged with preparing the elaborate Christmas Feast; the main course is Rudolph the roasted reindeer, cooked to perfection. And, in the spirit of the holidays, Lord Vampyre has graciously permitted his guests, the Monster Fighters, to partake in the festivities- albeit in a manner they may not have so desired

You do not have the required permissions to view the files attached to this post.
Top

Who better than protocol droid C3PO to guide Darth on a tour of Christmases past, present and future in an attempt to cause him to mend his ways and change his future?

We see young Anakin in simpler times enjoying Christmas with his mom in Christmas past.

In Christmas future, we see Darth dying in his son's arms....repenting with only moments to spare.

Finally, we see Darth remaking himself and being included in a celebration with friends young and old. He even dresses the part and carves the turkey, while Leia takes advantage of some mistletoe... 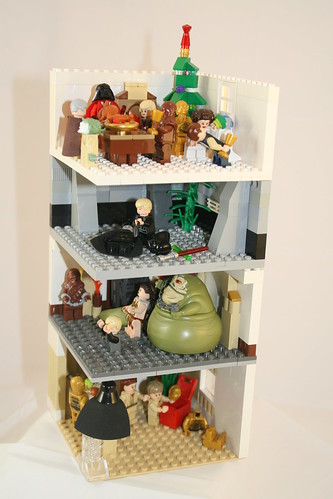 A Star Wars Christmas Carol View 2 by BeMild, on Flickr 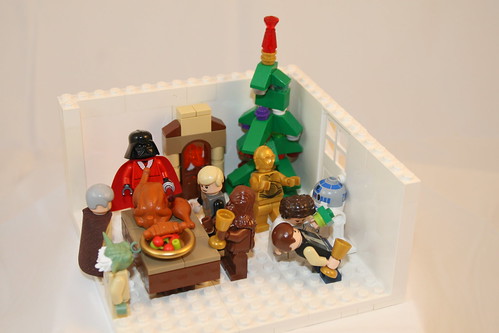 The Ewoks and another furry friend celebrate the holidays with great food, entertainment and decorations. From the speeder bike 'tree', storm trooper helmet percussion, to the 'friendly' open-fire rotisserie. Desserts abound with pies, cakes and a gingerbread man.
"Roasting Friends over an open fire. Wicket nipping at your nose. Although it has probably never been said, at anytime or anywhere... Merry Ewokmas to you!"
All Friends welcome!

You do not have the required permissions to view the files attached to this post.
Top 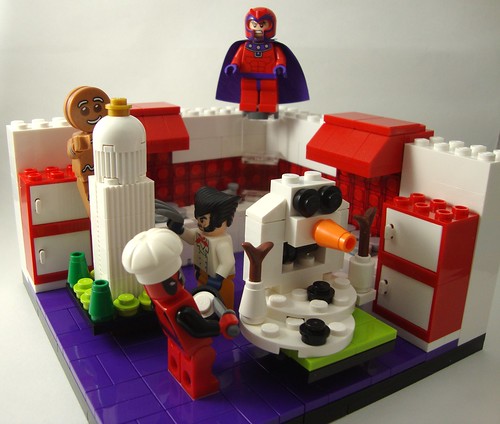 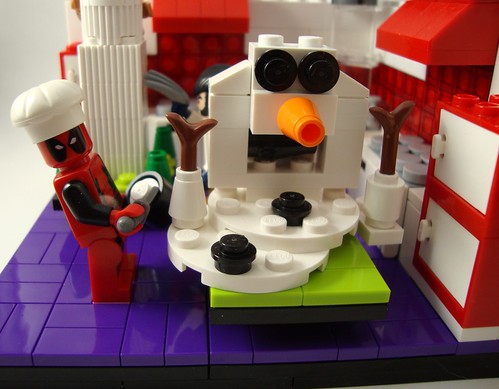 Look at this trove, treasures untold.
How many presents can one cavern hold?
Looking around here you'd think
Sure, she's got everything.

I've got stockings and gift wrap a plenty.
I've got candy and tinsel galore
You want golden rings? I've got five!
But who cares? No big deal,
I want more.

I wanna be where St. Nick is
I wanna see, wanna see him flying.
Riding around in that
What do you call it? Oh, sleigh.

Up where it's bright, up where it glows
Up where they stay all day in the snow.
Wandering free
Wish I could be, part of that holiday world.

Ariel the Little Mermaid celebrates the holidays of the human world with her seaweed tree and friends Flounder and "Santa" Sebastian. 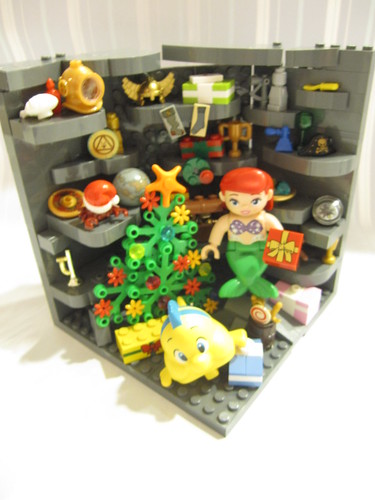 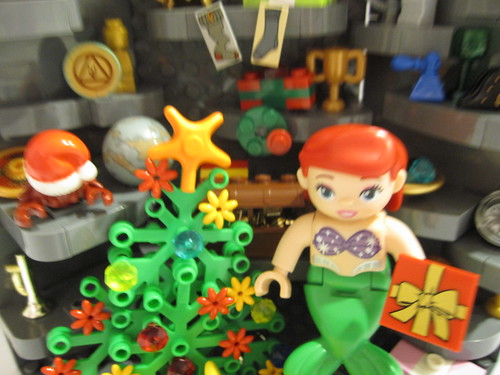 Not sure why I couldn't make the image display as others, used img code, Since there is not much time I would appreciate an admin corrects this or someone tells me how to fix it. =) [Thanks! Now I understand] 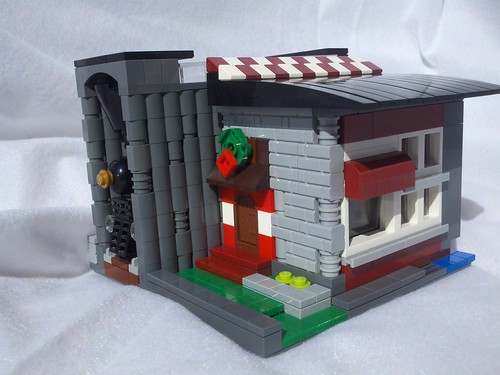 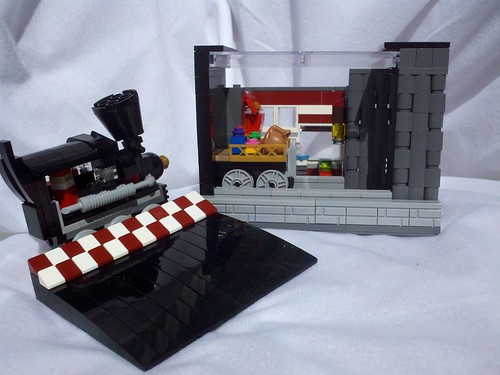 Drama:
I just looked at the rules quickly, said to myself that I would not return until the last day with the best I could, now it seams I messed it up since there are no minifigs on my vignette.So ... I hope the Santa can be considered as Micro since it is Steve's eyes (longshot) but I would still appreciate your comments or something instead of just being discarded.......

Explanation: This is the east wing on Santa's house/factory.
Here the elves load the gifts in the wagons, that IS a bag of holding! ^_^
Theme: Minecraft/Christmas
Time taken: 3 days. (I'm new!)
Planning ahead: none. lol.
Background: Here is my first "pro" creation. I started collecting LEGO in March 2013 and have been doing some random MOCs but this is the first time I actually dedicate hours to a real project.

Well thanks for your time guys. Feels good to be in a place were most if not all; are not j*rks like most part of the web.

The entry topic is closed and voting will commence sometime today or tomorrow.

As a reminder: These rules will also be posted at the top of the [Voting] topic.

Users browsing this forum: No registered users and 2 guests