Here's my insights/review for the exclusive LEGO Brand Retail Store set #3300003. This is a very rare set and is limited to only 300 sets for each grand opening store. There are 10 stores to be opened making total production of only 3000 sets in the world.

Celebrate the opening of a brand new LEGO Store in your area with the new, exclusive LEGO Brand Retail Store model! Not available for purchase, this set is only given out to a select number of customers with a qualifying purchase during the Grand Opening Celebration. We are proud to announce 10 new locations in North America opening in 2012:
•Nashville, TN
•Victor, NY
•Vancouver, BC; Canada
•Wauwatosa, WI
•The Woodlands, TX
•Peabody, MA
•Overland Park, KS
•Elizabeth, NJ
•Seattle, WA
•Alpharetta, GA 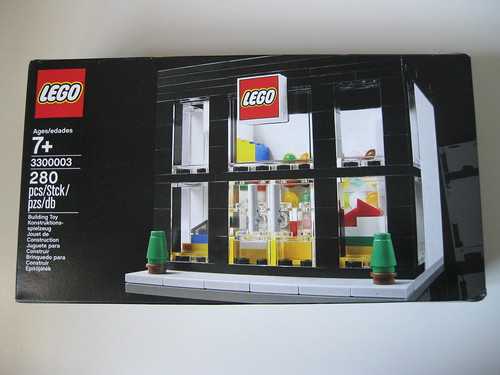 Front of the box. As usual, they have the recommended age, pieces and set number. No set name labeled though which is strange as North America boxes usually have set names. Regarding box sizes, the box is about the same size as a typical $19.99 USD / $24.99 CAD set.

Side of the box showing the store set with the roof lifted.

Back of the box showing details of the "Pick a Brick Wall" as well as the other parts of the store. The store background on the box is also a nice touch.

The instruction booklet. There are no advertisements of other sets at the back.

Dumping out the contents, you get 4 unnumbered bags. Seems like good value for a free set that you get for just spending $35!

The pieces sorted out. Lots of small pieces so that explains why there's 280 pieces! They do have some small transparent flat circle pieces which I believe are not as easily obtainable. Correct me if I'm wrong.

When you first begin the build, you start off with two 2X12 as the base plate. The build then quickly goes by with the walls and the pick a brick wall. Let's have a comparison of the actual store and the set to see how accurate it is so far!

On the right, there is a classic "Red Rectangle Brick". In the center, there are multiple displays. Not only did they include the Pick a Brick Wall and Checkout Counter, they also included both of these elements of the store. LEGO really put a lot of effort in designing this mini model!

Next, we start building the shelves of the LEGO Store. We build 2 of these and they go at the side of the store. Notice that they have choosen recetangle pieces with circles inside them to imitate the display circles in the actual store. Amazing!

Here's how these shelves looks like on the store set.

Continuing on, we build these 2 little things. I'm not quite sure what they are suppose to represent, but I guess they must be more displays for the store.

These 2 little guys go at the front corners of the store. After that, we start closing the front of the store with black and transparent pieces.

Here's what it looks like from the top after closing the front of the store. Even the colors of the floor titles matches the actual store!

Next, we start building the roof. Those circle transparent pieces are the ones that I think are "hard to obtain". Again, correct me if I'm wrong.

This is the bottom of the roof. Those transparent circle cylinder pieces represents lights for the store. Great finishing touch!

View of the store from the front. I have to say, majority of us will probably not recognize that this is a LEGO store at first glance. A little disappointed that they did not print the LEGO logo on the piece. Instead, they gave us a sticker. I guess printing on pieces are a big cost for LEGO. But nice green plants decoration on the front!

Complete set with sticker applied. Now that looks more like a LEGO store!

The sticker part killed it in the end, but I guess we just have to live off with that. The black walls on the front of the store weren't also really my taste (just my personal preference

), but I suppose that designers were probably trying to replicate the Denmark store. Awkward though since they're offering this set only for stores opening in North America and the store looks like the one in Denmark. But I have to say, its still rather nice.

But now that I got the minor cons away, I have to say this is a very well designed micro scale set. While it may be small, LEGO really packed it with details. Considering you can get the set for just spending $35, this is definately a set not to be missed. Although its somewhat a "freebie", LEGO still took it seriously and paid a lot of attention in getting the set to look like the real thing.

Its rather unfortunate that LEGO is unable to sell this set to the general public as I think its a great set and everyone should get one. If you happen to be near a grand opening store, I would definately and highly recommend lining up for this set. Must get! :)
Top

Thanks for the review. Looks like a nice little building. Are there any parts that can only be found in this set?
My Flickr | My YouTube

I could see your box set had been crushed, too. Mine is as bad as yours.

I expected the lego logo was printed on the 2X2 tile because this set is limited edition. It is disappointed.
My First MOD
My Jabba Palace with Rancor Pit Resizing
Top

Glad to know the store sent you one of these sets in the end. Great review, you beat me to it though.

I'm also glad you were able to get one. Nice review, I can't wait to try and get one!

It is too bad that the logo is a sticker. Don't they have that element for a dice piece? It still looks very cool overall.
Top

atmail35 wrote:It is too bad that the logo is a sticker. Don't they have that element for a dice piece? It still looks very cool overall.

Good review. The 1x1 transparent round tiles you mentioned will soon be more readily available since they are used in some of the City Miners sets (like the $13 pick-up truck). The piece I've never had before is the transparent headlight brick, it looks like that has only been in a few sets. The 1x1 Transparent brick is also fairly rare in recent years, but has been around for a long time.
Top

I've seen transparent round tiles before at the NYC store pick-a-brick wall. I got a bunch of them for one of my MOCs to represent road salt.
Top

How early did you have to get to your store? Any advice as a store is opening up in my state this weekend.

Show up 1-2 hours before the store opens. It is also best if you know what you want, grab it and check out quickly.
Top

Legobrandon wrote:Glad to know the store sent you one of these sets in the end. Great review, you beat me to it though.

atmail35 wrote:I'm also glad you were able to get one. Nice review, I can't wait to try and get one!

This is indeed a very nice set and I have to thank egadzook for this one. After getting the rep to forward my email to the store manager, he quickly shipped it out. Great customer service!

cpw wrote:I've seen transparent round tiles before at the NYC store pick-a-brick wall. I got a bunch of them for one of my MOCs to represent road salt.

Huhbuhwhat??? When did you see them there???

ALL HAIL THE BLACTRON EMPIRE!