Build your way through every day in LEGO® brick style!

Build an entire year with LEGO® bricks! Create the calendar you need with colorful bricks labeled with the days of the week, months and numbers 1–31. Follow the building instructions to rebuild the Brick Calendar every month! Makes a great gift for any LEGO builder!

Box Front
The front shows the completed calendar for the month of September. The cheerleader and skateboarder seem very happy, even though school has started up again. ;) It also indicates "The days and months are in English". 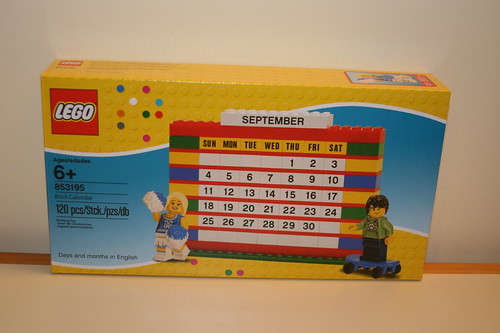 Box Back
The back shows how the calendar duing the assembly process. 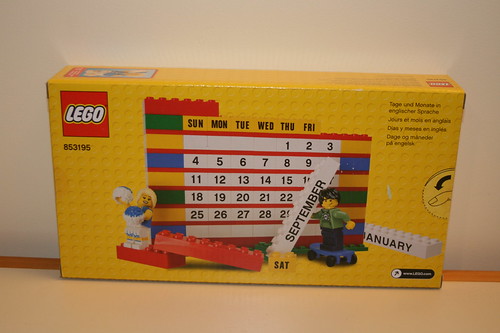 Dumping the contents
This is what the contents look dumped straight from the box. You have one large bag and a small set of folded instructions. 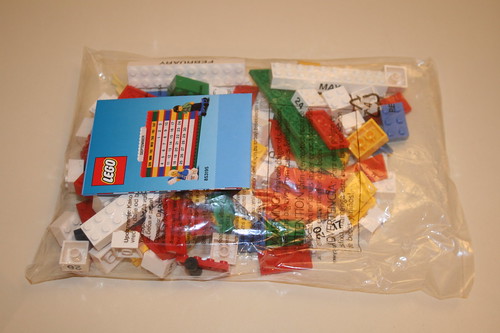 Instructions
One side shows the 1:1 scale on how to build it. 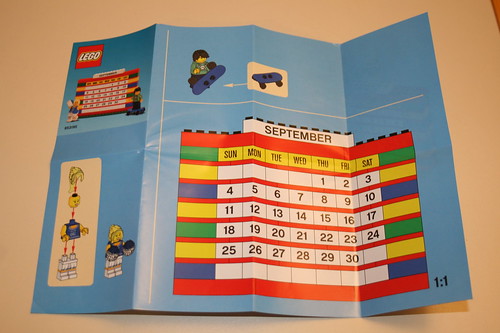 The reverse shows the inventory. 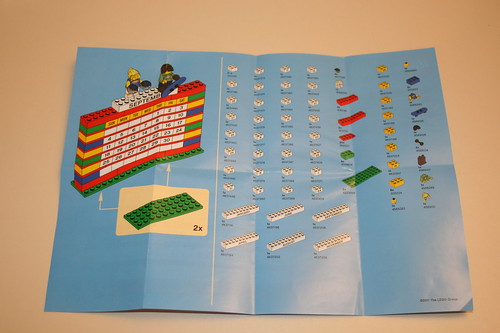 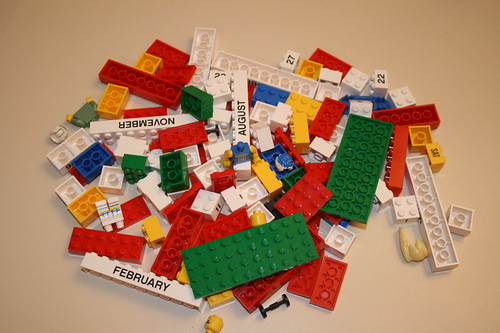 The Printed Pieces
As you can see, you get 6 - 2x10 white bricks with the months printed on them, there are two months on each brick. The pairings are: January/February, March/April, May/June, July/August, September/October, November/December. You have 7 pieces for the days of the week and 31 numbers. 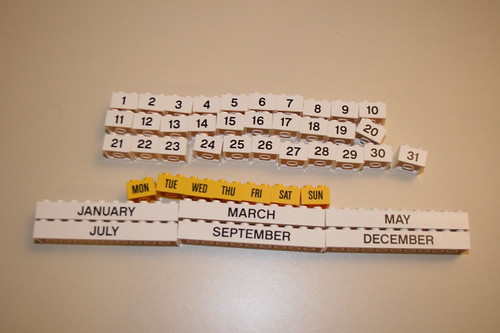 The Build
I built it from bottom to top. It is helpful to have a calendar in front of you so you line up the days properly. the nice thing is that you can start your week with whatever day you want! I started with Sunday, but I might start with Saturday next time for fun, or sometimes Monday is a popular start date too. 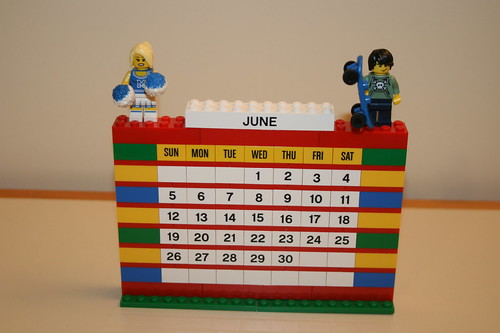 The calendar looks a bit plain, they used all primary colors. I might mix it up for future months with some different colors. One "issue" is that once you build the month, you have 5 bricks for the remaining 10 months that don't have a home. I envision these getting misplaced. You can clip them to the back of the calendar on the green stand. If you display this against a wall that would not be too unslightly. If you have it on your desk, it might not look great.

Pros
2 Series 1 Minifigures included!
All pieces are printed.
Fun for all ages.
It would be a great gift for a teacher or anyone who works in an office (you could customize it by adding an additional minifigure that might be the profession of the recipient).
You can customize which day of the week you start with.

Cons
Colors are a bit dull
For February and months with 30 days, you do need to turn the "31" and other numbers around so you only see the blank side. This looks a bit unslightly if the reverse of the calendar is visable. However this can be rectified by using your own 2x2 brick.
Where do you store the other 2x10 bricks for months that are not being used?

Final Thoughts
I think this set is worth $15, it will be fun to rebuild each month. It is a nice way to get another cheerleader, which was hard to find when the Series 1 CMF was released. Perhaps they could have picked a more "fun" second figure, like the Robot, but it seems like they are sticking with two sports oriented figures.

I will probably display it with other figures as well, just for fun. We gave one of these to my husband for Father's Day. My daughter said she wants to go to his office each month to re-build it for him. We actually bought 2, so we could have one at home.

ETA: I just thought of a solution to the "unslightly back" issue for those with an open desk. You could buy two sets and build two months (same or this month and next) and place them back-to-back and attach them together.
Top

thanks for the review.
Ill have to pick one or two up for sure.
I have inoperable cancer and am unable to work. Any gifts would be appreciated. Thank you!
Top

I was on the fence about picking this up, but seeing these pics have helped convince me to decide to purchase this. The minifigs definitely add to it's value, and it'll be a breeze to customize this with a much more appealing colour scheme.

Thanks for the review!
Top

Thanks for the review! I like how 2 S1 minifigs were added here to liven the set up (well, somewhat). I hope LEGO starts doing this more to different similar sets...
Top
Post Reply
4 posts • Page 1 of 1

Users browsing this forum: No registered users and 13 guests