Set Details:
(Pirates of the Caribbean) Released April 18th 2011
95 Pieces with 3 Minifigs
Retail Price: $11.99 USD
Price Per Piece: $0.13
LEGO Description: In the dead of night, Captain Jack Sparrow sneaks into the captain’s cabin to steal a coveted ship-in-a-bottle. As he turns to leave, two pirates jump out of the shadows. With nowhere to run, will he be able to fend them off and escape with the loot?

So this is my first ever review so please bare with me as I might leave out some important information.

So this is one of the new Pirates of the Caribbean sets that just released this week. It is Item 4191 The Captain's Cabin.

Minifigures: This set includes 3 minifigures of which there is Jack Sparrow and two other pirates that are unnamed. Jack Sparrow has two faces that are available for display. The long haired pirate also has two faces while the "bald" one only has one face but has detail on the back of his head. However, the bald pirate does have a sword holder. (you cannot put the sword holder on Jack. His hair will get in the way.) They all have details on their backs. 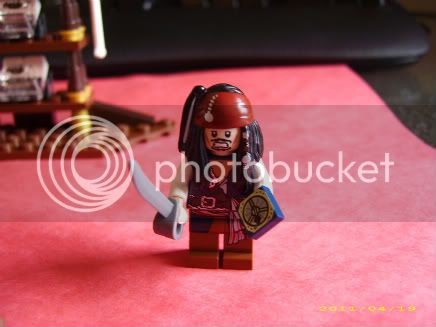 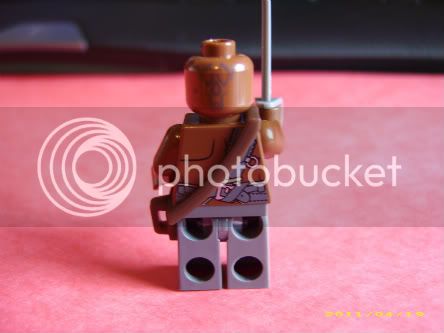 
Set details: This set comes with a book case, globe, and a table. The book case has two shelves that hold two ships in a bottle.

Ship in a bottle

The globe is pretty accurate with all continents and islands. The globe can fully rotate on its base.


The Captain's table has four legs made out of bone. It comes with a candle, goblet, and a circular map. The table fully rotates on the base.

You might have noticed that you get three swords, one gun, and one compass. However, there are extra pieces to this set and you end up getting an extra compass and an extra sword.

Conclusion: This is by far one of the best sets in the Pirates of the Caribbean line. For as little as you pay for this set you get some awesome stuff. There are no stickers in this set. All items are completely etched and have very good detail. I especially love the globe and the ships in a bottle. This set is definitely worth your $12. Go pick it up.

Good review.
Love the ship in bottles and globe!
I have inoperable cancer and am unable to work. Any gifts would be appreciated. Thank you!
Top

Great Review, Keep it up.
Top

The globe, map and compass are totally going to be used in so many Steampunk MOCs. I can't wait to see them!

While this set has a very low piece count for the price, the pieces themselves are so spectacular that it outweighs the price/piece ratio.
ALL HAIL THE BLACTRON EMPIRE!

The figures are very detailed and I really like the ships in the bottles. Great review!

Thanks for the review... lots of neat little parts in this one!
LEGO, it's not just a toy, it's an addiction... ;)
Top

Well, if the rumours of a fifth and sixth POTC movie are true, the POTC line is going to make LEGO a bantha load of money. These sets look awesome. I wonder what nationality that pirate with the hair is? Native South American maybe?
Who is General Failure and why is he reading my hard disk?
Top

Great review. Super happy to see these sets coming out. I'm a huge pirates fan and this is a perfect set.
http://www.eightclickbrick.com/ Find me here on the internet.

Great review! Keep up the good work and thanks for sharing your purchase!
Top

Thanks for the review. What does the poster look like? how big is it?
Top

Nice review! I really like a lot of the unique elements and was sold on it after reading your review.


slacker wrote:Thanks for the review. What does the poster look like? how big is it?

Thanks for the review. I did also snatch this set last week at the Grand Opening of the Lego store in Fairview Mall, Toronto.
Top
Post Reply
12 posts • Page 1 of 1

Users browsing this forum: No registered users and 42 guests