Hunt for your homework at Hogwarts!

Introducing LEGO Games, the world's first collection of games that you build, play and change. With the unique buildable LEGO Dice and changeable rules, LEGO Games is a great way of having fun together with family and friends. Enroll in the magical Hogwarts School of Witchcraft and Wizardry to search the castle for your studies in the new LEGO Harry Potter Hogwarts game. Be the first to race down moving staircases, through secret passageways and back to your commonroom with all of your homework to win! This fun and challenging family game is for 2 - 4 players. 1 buildable LEGO Dice 9 LEGO microfigures 5 Special microfigures include Harry Potter, Hermione Granger, Ron Weasley, Draco Malfoy and Albus Dumbledore 4 Hogwarts student microfigures (one from each house) 332 LEGO pieces 1 rule booklet 1 building instruction booklet For 2 - 4 players Game play approximately 10 - 20 minutes

I like to start my reviews with broad sweeping claims. This review's claim is that this is the BEST GAME that I have played, and that is a lot of them. This game is fun and challenging, the pieces are rare and desirable, the microfigures are detailed and plentiful and it's freaking Harry Potter.

With that said, welcome to Hogwarts School of Witchcraft and Wizardry. 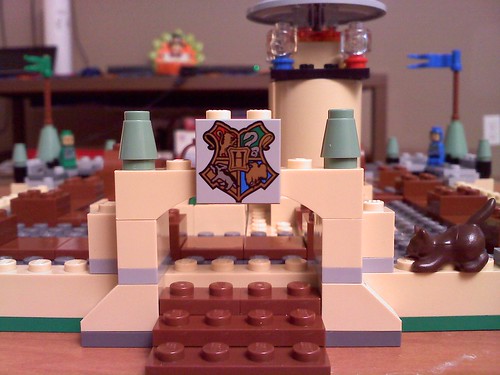 The entrance isn't as impressive as in the movie :P 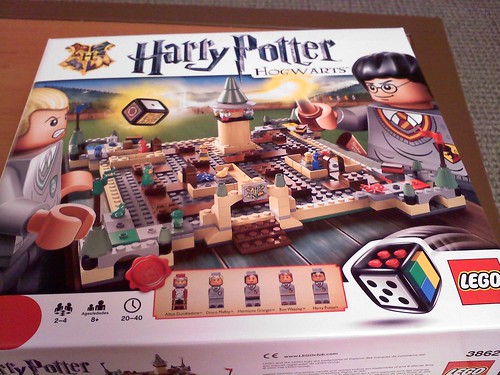 Here's the front of the box. It's high quality cardboard and it stores the entire game board in there quite nicely. 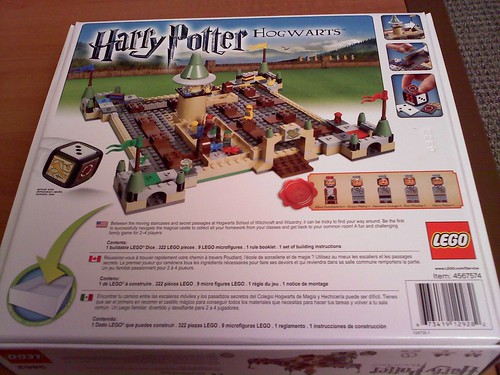 And now the back of the box. Just some information that you're going to get from this review.

Let's move onto the microfigures. 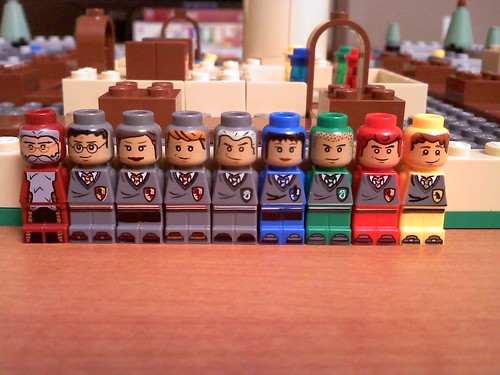 The Gryffindor character is the only one I can't assign. Who had flaming red hair in Gryffindor? Besides the Weasleys, thank you very much. There aren't enough freckles on that microfigure for him to be a Weasley.

Anyways the microfigures have spot on printing and look very much like their counterparts from the movies. This is just one part of the desirable pieces I mentioned. 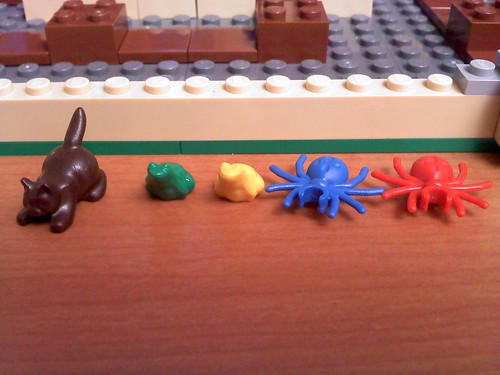 I don't know about you all but I don't have any multicolored spiders. I just have the plain black ones. This set comes with Mrs. Norris the cat, a green and yellow toad (or frog, it's hard to tell) and the blue and red spiders. Be careful around the spiders though; if you get bitten by both of them you turn into Toby Maguire. 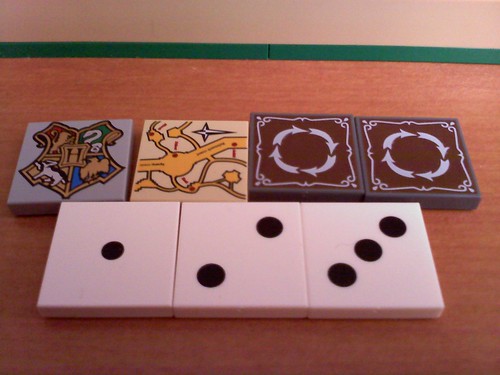 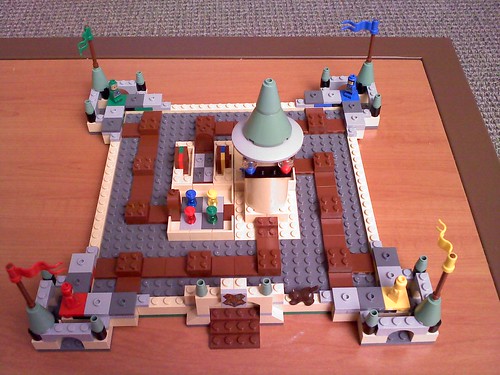 Moving on to the game itself. Here is the board game set up at the very beginning. Like my other game reviews I'm going to take you through an actually game itself and explain the rules. You can see from here that each person is assigned their own corner. From this corner they have to maneuver around the board by rolling the dice and following the assigned action on whichever side of the dice they roll. The aim of the game is to be the first one to successfully collect all four parts of your homework (Crystal balls, Potions, Creatures, and Library Books)and then return back to your common room (the starting point for your character.) Each turn a player gets to move 1 whole tile. If they can’t move because they have no path available to them then they can’t move. 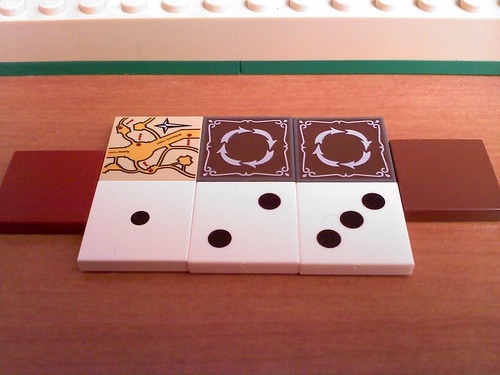 These are all the tiles for the dice. Notice that the there are 8 tiles and only 6 spots for tiles on the standard 6 sided dice. Two of these are for the alternate rules (the brown one and the maroon one. That's maroon right?) 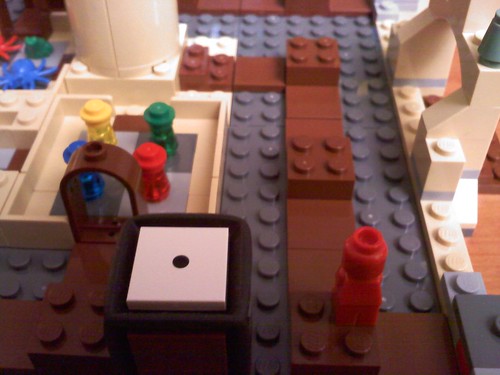 This is really hard to explain without pictures so I will just let the rule book explain it. 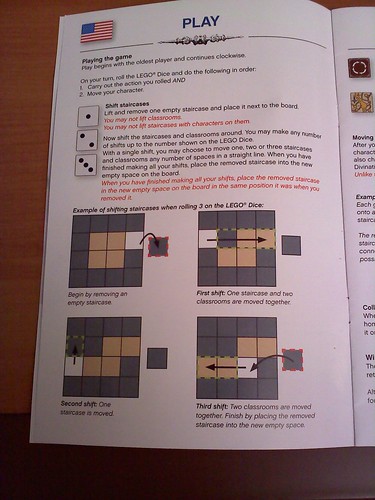 It’s important to note that you can’t lift classrooms and you can’t life the ‘staircases’ with characters on them. You CAN slide them though. 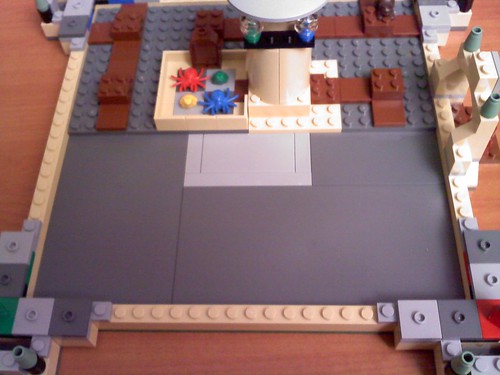 If you’re wondering about how you are able to slide the LEGO plates then it would be a good idea to show you this picture here. There are HUGE dark gray tiles down on for the plates to move around on. There’s also a smaller gray one in the center. 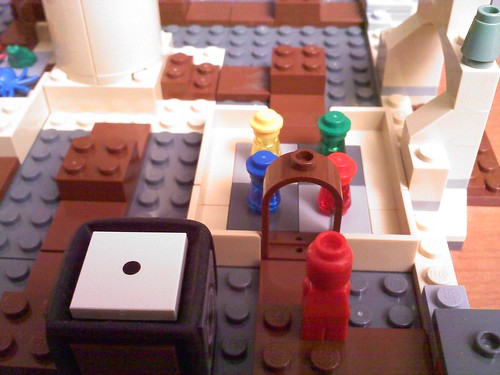 So without moving your character yet, you have brought the classroom closer to him and within his one move per turn.

The next two tiles on the dice are the rotate tiles. 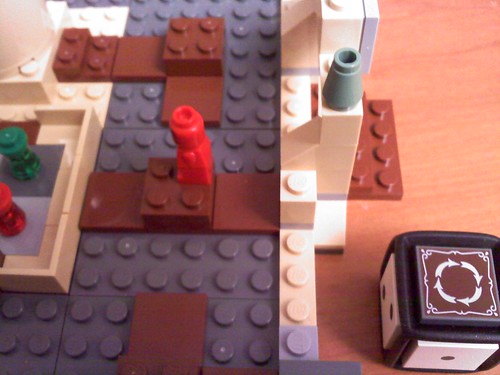 Right now that character is stuck on a staircase that doesn’t connect anything. This is a major problem because right now he can’t move. Luckily for him, he can rotate the staircase he is on and make it connect to the other staircases. 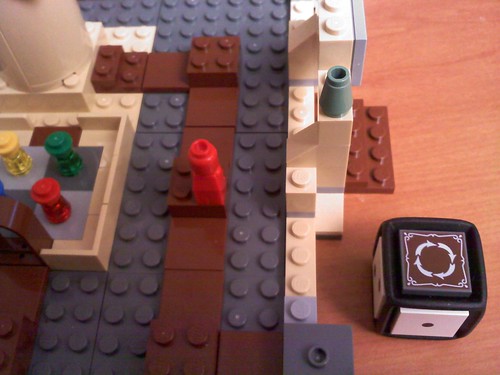 Tada! He’s now free to move onto another staircase.

Quickly, think back to our friend stuck on that staircase!

He has another alternative open to him on the dice. If he rolls the Maurader’s Map tile on the dice then he can move through a ‘secret passage’ and connect to another tile adjacent to wherever he is. So he goes from stuck on this staircase… 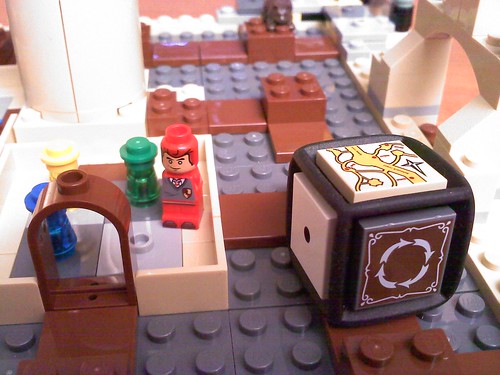 …to chilling in the potions room, probably making trouble for Alan Rickman (If you did not get this reference you should be ashamed of yourself. He’s the actor who plays professor Snape. He was also Hans Gruber from ‘Die Hard,’ the suave terrorist that Bruce Willis throws out of the tower. He was also in Bottle Shock, a pretty awesome movie. It got about 0 publicity though, so you probably have no idea what I’m talking about. Alright, back to the review.) 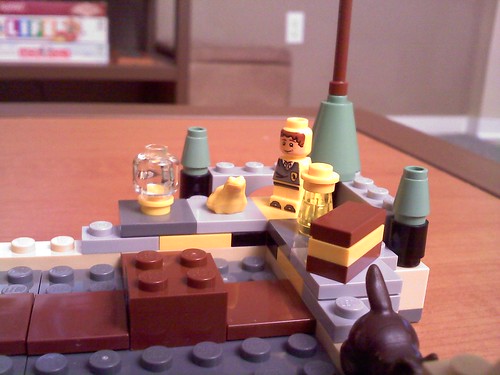 Eventually a person will collect all four of the required homework items they need from the various parts of Hogwarts and after returning to their commons room (you HAVE TO return to your commons room to win) the game is over and that person won. Doing your homework has never been so rewarding.

Remember those alternate dice methods though. The game could be vastly different here. Let me give you the rundown on those two alternate play options.

The first one involves Mrs. Norris, Filch's cat. You will remember from the books that Mrs. Norris is kind of like Filch's familiar, and she tends to block the student's mischievous activities. She pretty much plays the same role here. 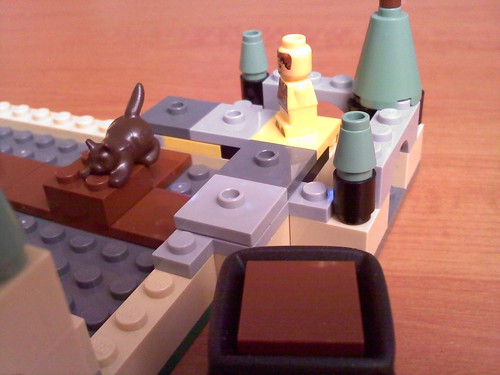 Roll the brown tile and the player who rolled the dice gets to chose a spot to place Mrs. Norris on the board. Wherever Mrs. Norris is placed, no one can go on that square. You can trap people on staircases. Mrs. Norris cannot be placed on a classroom. 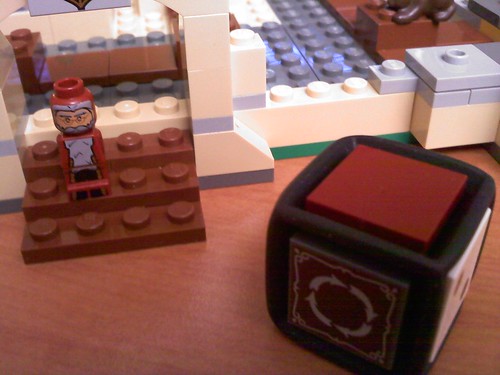 The second alternative rule involved Dumbledore, and as you probably guess it, Dumbledore is magical.

When you roll the maroon tile, Dumbledore moves 1 staircase/classroom, wherever the player chooses that is adjacent to wherever Dumbledore is currently located. 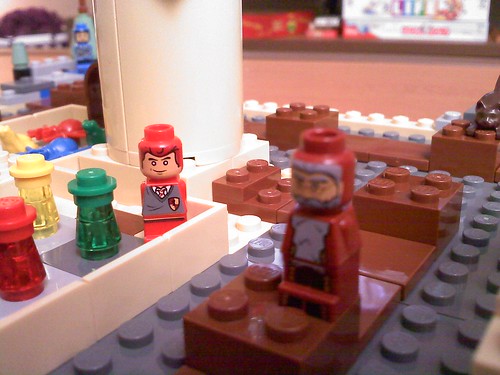 So suppose that Dumbledore is located on this staircase. Your player is in the classroom right next to it. If you roll Dumbledore's tile on the dice you can move Dumbledore to your classroom, even if there's a wall separating you or if there is no staircase connecting the two together. 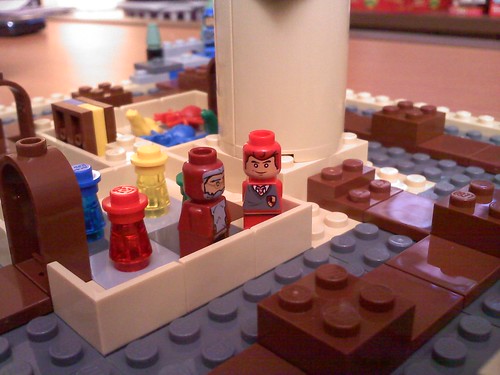 So now Dumbledore is next to you. He can now basically teleport you through walls to an adjacent square, even if there is no available path. So you can go from this potions room... 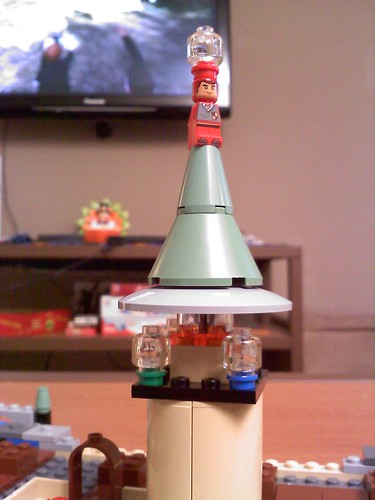 ...to the top of the Astronomy tower! He's basically a roving Maurader's Map. If you move onto Dumbledore's position you can also then gain his help, even if you didn't roll his tile.

So here's the rundown for this set, in list form.

1. I recommend this set.
2. It has a variety of unique, rare, valuable and useful pieces (microfigures, large tiles, animals, printed tiles, sand green pieces, lots of tan pieces, LEGO dice).
3. The game is very fun and has a high amount of re-playability.
4. The price is worth it (Price per piece is good and the pieces you get are even better).
5. Even though it is a licensed set, the price is still low and decent.

There are other criteria I'm not considering here, but if you're not convinced by now to get this set, I don't know how else I could convince you.

Go out and buy, then play this game!
http://www.eightclickbrick.com/ Find me here on the internet.

Been kind of waffling on getting this one but thanks to your great review lego just made 30$ lol.
Top

InfectiousZombie wrote:Been kind of waffling on getting this one but thanks to your great review lego just made 30$ lol.

I'm going to have to ask LEGO for a cut of the money soon :D Glad to hear that I can help though.
http://www.eightclickbrick.com/ Find me here on the internet.

Thanks for the review. I picked one up a couple of weeks ago using a saving coupon. It's a fun game. More fun if the kids don't win 99.9% of the time. :)
My Flickr | My YouTube

Good review. i like the micro guys and how detail they are.
Top

I bought this for my girlfriend since she likes harry potter and board games, and we both had fun. It would probably be better with more people to extend the length of the game since it was pretty quick to win with few people.
Top

Really good review but $40 is too much for this game. Maybe if there's a sale, I will get it. :)
Top

Senator wrote:Really good review but $40 is too much for this game. Maybe if there's a sale, I will get it. :)

I'm pretty sure that only Toys R Us retails it for $40. It's quite a ridiculous mark up.
http://www.eightclickbrick.com/ Find me here on the internet.

legitimatealex wrote:2. It has a variety of unique, rare, valuable and useful pieces (microfigures, large tiles, animals, printed tiles, sand green pieces, lots of tan pieces, LEGO dice).
4. The price is worth it (Price per piece is good and the pieces you get are even better).
5. Even though it is a licensed set, the price is still low and decent.

These are the reasons I bought the set -- previous to this review. :) I also had a 40% off from Borders to help the sale along.
R.I.P. Katy Flagg

Users browsing this forum: No registered users and 5 guests