Thanks to the LEGO company for donating this set to review. 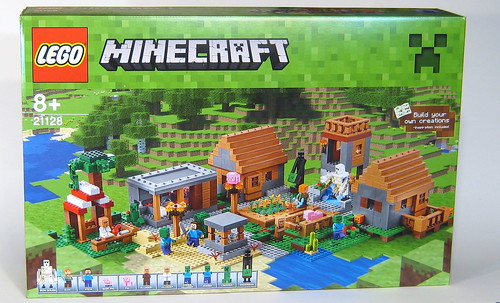 The back shows a rearranged layout of the village. 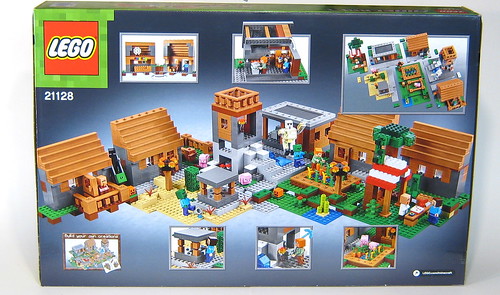 There are two instruction manuals, the first is in the stronger book format and the second is a magazine style.
Book one contains the instructions to build the model shown on the box, book two contains alternate models for a different layout.

There are eleven numbered bags of parts and one unmarked bag with additional plates.

Medium nougat is a color that, while isn’t very new, is a somewhat rare color used sparingly in sets. This set on the other hand has over 460 pieces in this color. 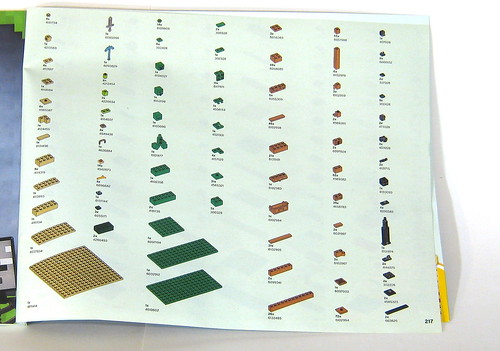 These are the printed bricks and tiles, only the ender pearl and cake are new prints. 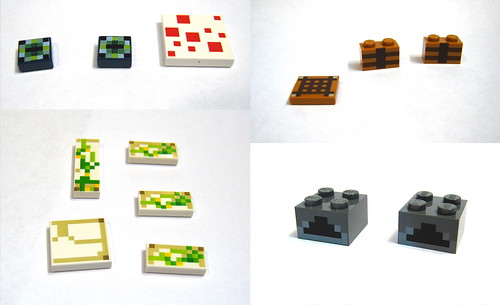 Some other pieces that caught my eye were the 2x4 plate and 1x1 studs that have never been made in bright green before. 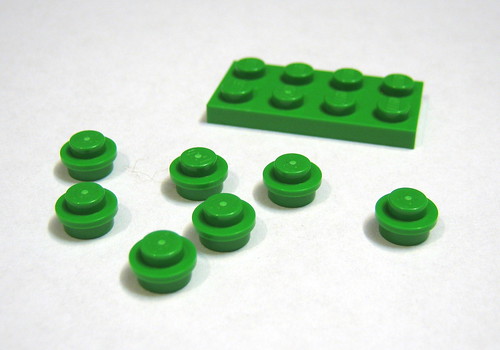 
Steve and Alex are the exact same figures we have seen in many other minecraft sets, but the villagers and the new robe piece are new and unique to this set.

The other mobs include a zombie villager, normal zombie, enderman, iron golem, creeper, pig and baby pig. The zombie villager is exclusive to this set.

The iron golem is the same as in set #21132 with printed parts to represent it’s mossy surface. 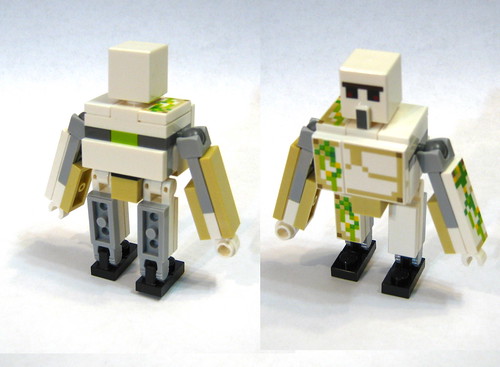 The villagers, zombie villager and iron golem all have the same head mold. 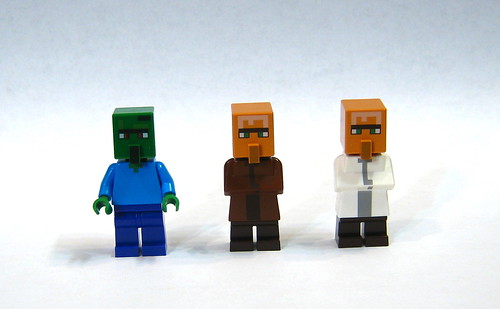 The village is made from 9 easily separable sub-structures.

The first structure is apparently a trading post. No such structure exists naturally in a village in the game but all the items shown on the table are items that can be traded with villagers. 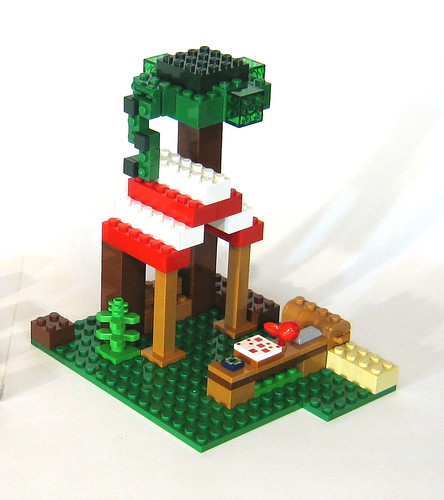 The second structure is the blacksmith’s shop. It looks just as it would in the game. 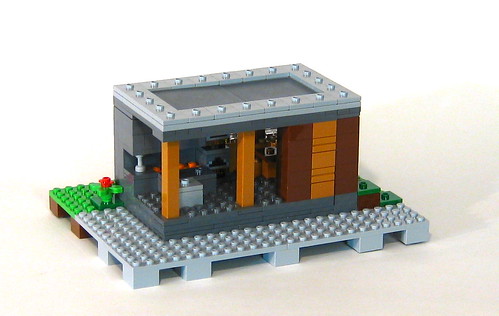 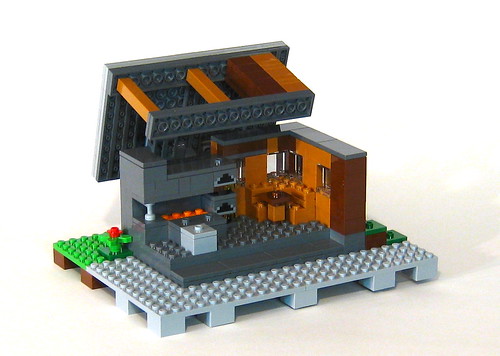 The third building is a library and again looks very similar to it’s source material except that the windows should be bigger. 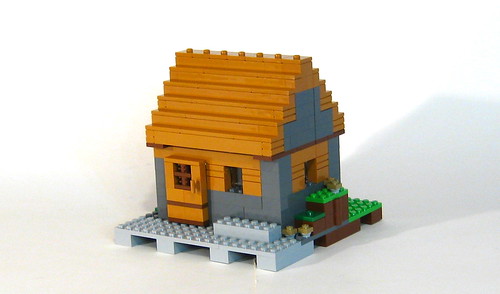 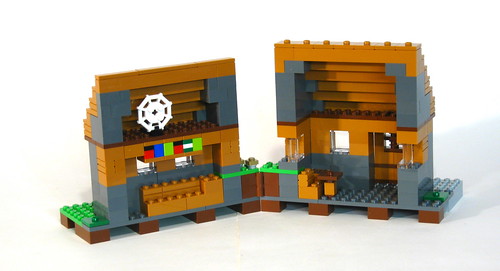 The fourth is a small house with balcony (Those brown flowers used in the posts are a pain to get straight), built on a rocky terrain 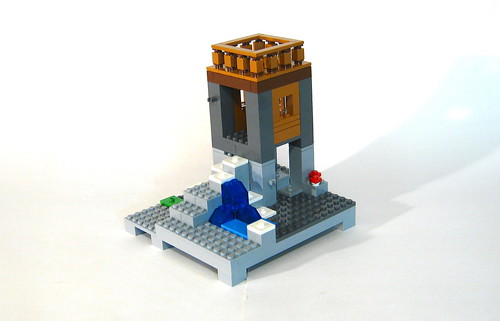 The house is designed to be easily removed. 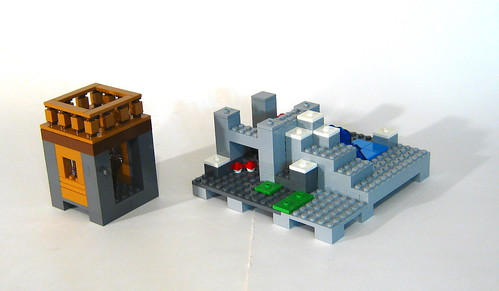 Parts 5, 6 & 7 are a farm (with a lamppost nearby to enable night growing), an animal pen, (Which is something that doesn’t occur apart from other structures naturally in villages.) and a section of grass and water with sugar cane (which shouldn’t be growing at different rates within the same square 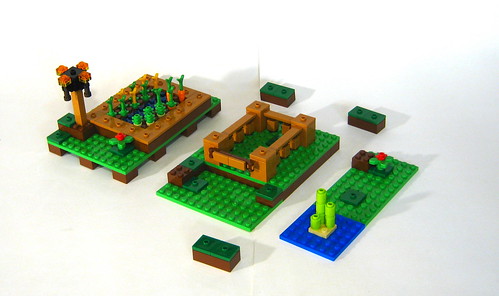 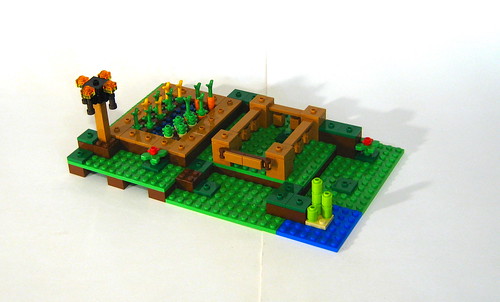 Part eight is a well, and having sand and a cactus nearby would mean that this village is on the edge of a desert. (But not close enough for the structures to be built of sandstone) 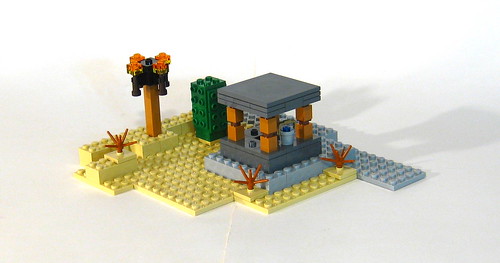 The final structure is a butcher’s shop with a balcony and more of those hard-to-get-straight posts. 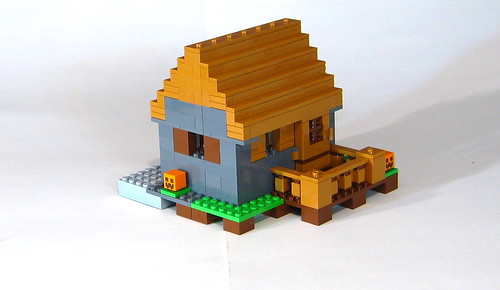 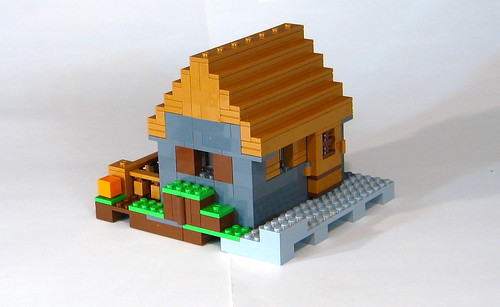 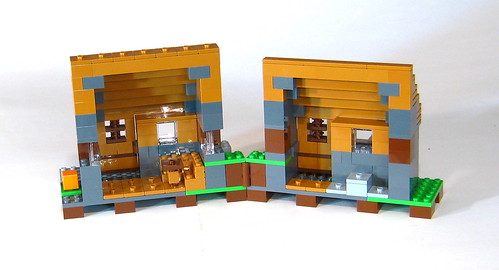 The complete village is attached together with only a few 2x4s so if the set needs to be moved it has to be done in several sections to avoid falling apart. 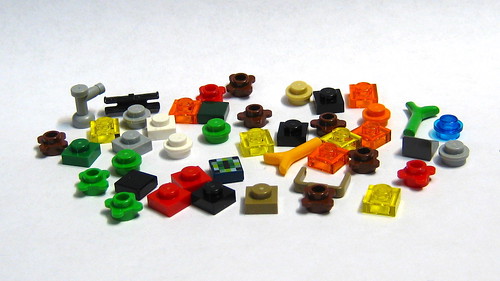 The second instruction book contains instructions for rebuilding a portion of the village (trading post, well and blacksmith’s shop) into a wall to protect your village from hostile mobs. 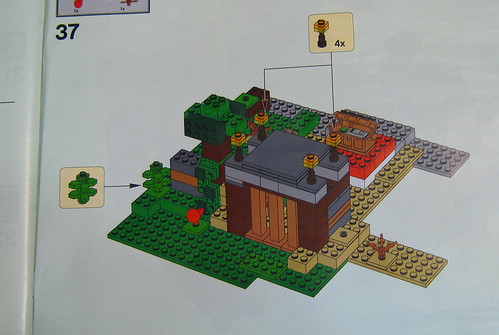 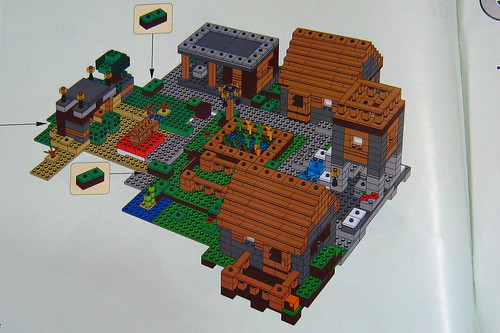 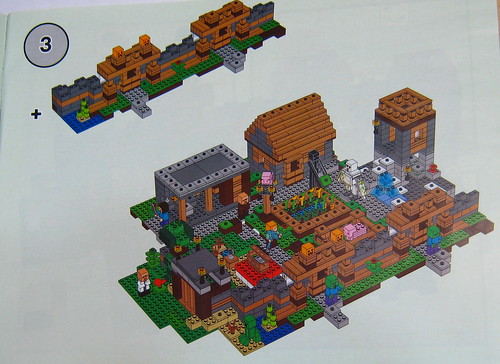 
DESIGN 8/10 - Except for the trading post the elements of the village are very accurate to the source material.

BUILD 7/10 - A lot of basic straight up building that feels a little repetitive.

MINIFIGURES 7/10 - Three figures are exclusive to this set (2 villagers and zombie villager), Steve or Alex appear in virtually every other Minecraft set.

PLAYABILITY 10/10 - This is one area where this set excels, it is more easily customizable than most sets by rearranging the parts of the village. And the separate structures of the set are sturdier than a lot of other minecraft sets, so as long as it’s on a hard flat surface it stays together very well.

PARTS 7 /10 - A lot of common pieces, basic bricks and plates, (and it does have a lot of larger plates) but also quite a few pieces in medium nougat. No stickers :)

OVERALL 7.3/10 I think the reason that I feel this set doesn’t quite measure up is that in my opinion large sets should be one big model (building, vehicle, creature etc.) with maybe a few smaller models on the side. This set could have been several smaller sets and then been sold as a collection. Nonetheless this set would make a great gift for the ultimate Minecraft fan.

Thanks for reading and don't forget to answer the poll.
Top

thanks for the review, I'd like this set a lot more if not for that price

Thanks for the review. Review was great, set was very uninspiring.
Top

I like the set, it goes great with a minecraft theme builds. But I don't like the price. Hopefully it'll go on sale at a more realistic price per piece.
Top
Post Reply
4 posts • Page 1 of 1