Here's the front of the box, showing the set with all characters placed in it: 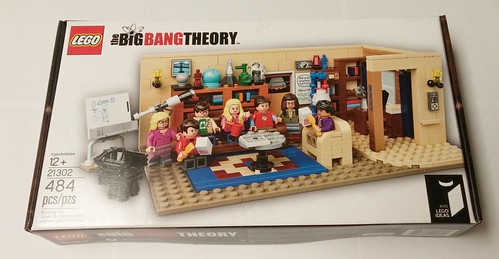 And the rear, with some closeup details of the set, and each character lined up, some of them with accessories:

The box features a flip-top lid, as is customary with the Cuusoo/Ideas line: 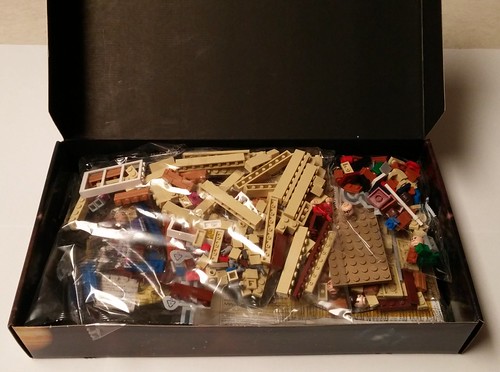 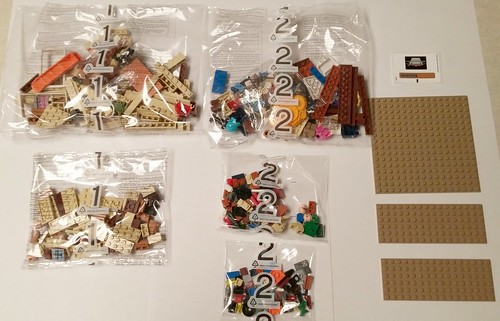 Speaking of the sticker sheet, it is mercifully small: 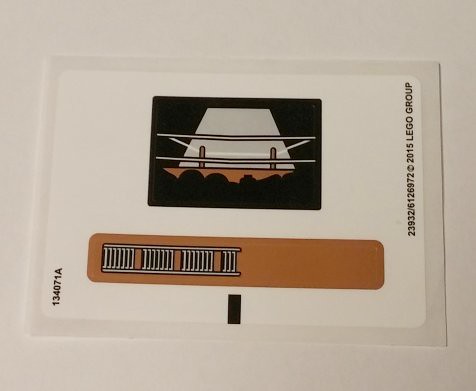 The sticker of the boxing ring poster is supposed to include the red and blue Rock 'em Sock 'em robots, but apparently they didn't have the rights to do that. And for those wondering, the sticker that looks like a small ladder is actually supposed to be an old electrical fuse holder.

The instruction booklet is perfect-bound with thick glossy pages: 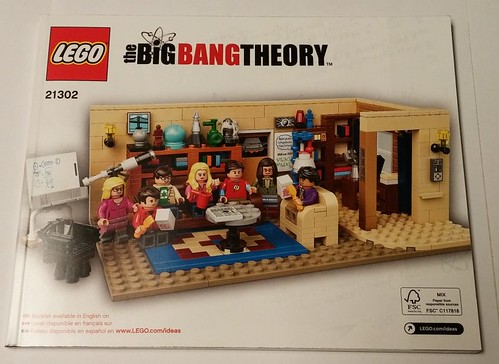 Before the building instructions, the booklet features a description of the show's story (in English, French, & Spanish) along with a picture of the primary cast:

There are also individual profiles of each character in minifigure form: 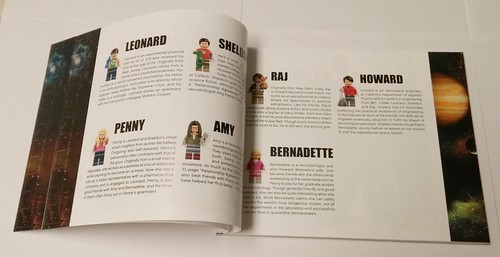 Sprinkled throughout the building instructions are quotes from each character: 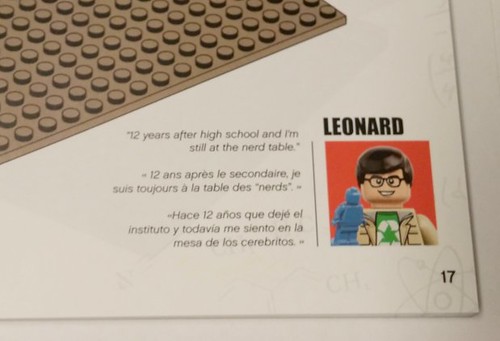 And at the end is a profile for the two main designers responsible for the original project and an advertisement for the Ideas website:

In the following series of pictures, you can see the distribution and colors of all the elements (including spares): 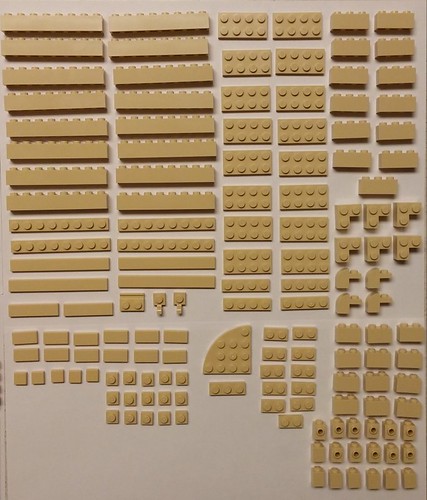 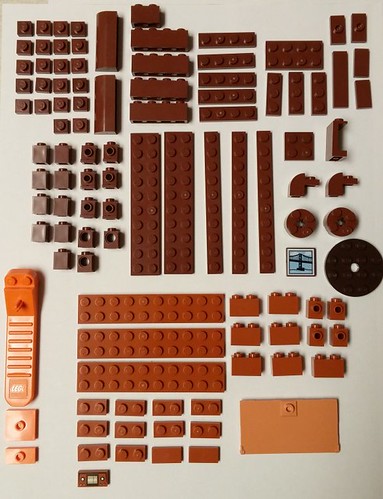 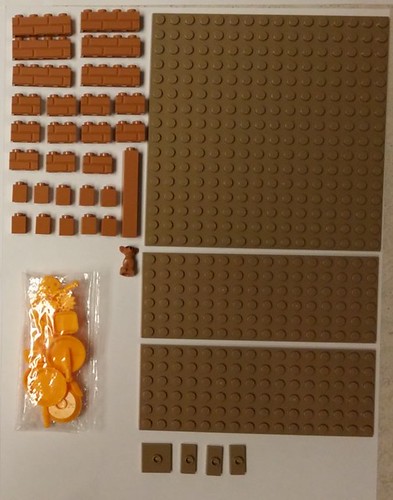 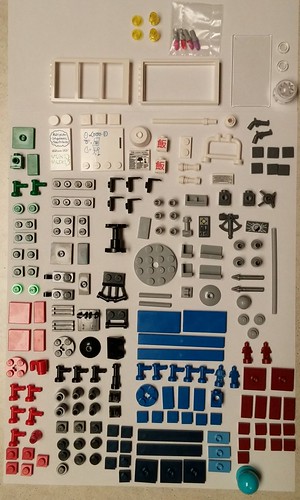 Dominant colors are tan, reddish brown, dark orange, medium dark flesh, and the dark tan base plates. Though it's difficult to tell in the pictures, there are 4 shades of blue and 3 shades of green (including transparent).

Below are what I believe to be all of the completely unique pieces for this set (at the time of writing): 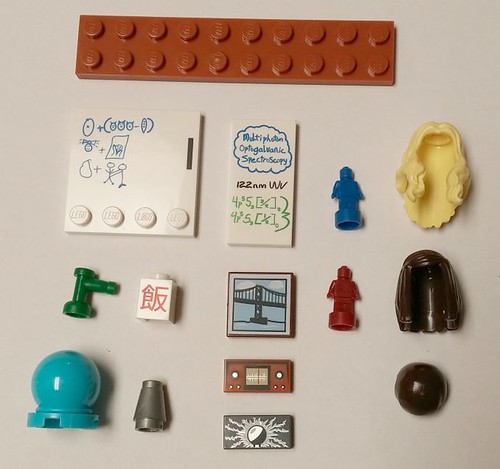 It appears that at least 3 hairpieces (for Leonard, Penny, & Amy) were made just for this set, which I thought was a violation of the rules for Ideas projects (i.e., submissions must not require new/custom pieces). Maybe it was deemed that these hair pieces would still be useful elsewhere, so they were justified? If anyone can confirm they have been used elsewhere, please let me know in the comments.

The pieces below aren't unique to this set, but have only been used in a handful of other sets: 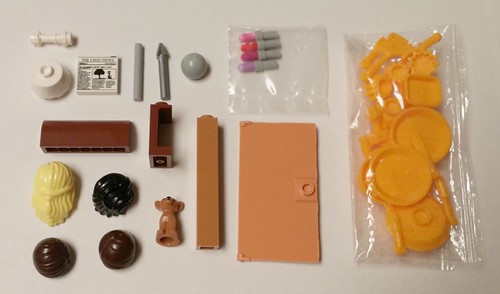 Leonard and Penny share the same leg pieces, as do Sheldon and Raj, though each color seemed like slightly different shades to me. Both Amy and Bernadette have the new two-tone legs.

And here they are from behind:

In addition to having alternate faces, every character has rear printing on their torsos.

No longer looking like they've lost their hair in a lab explosion:

It should be noted that Leonard's hairpiece doesn't completely cover either mouth that's on the back:

Getting into the build, with most of the back wall and one bookshelf complete. 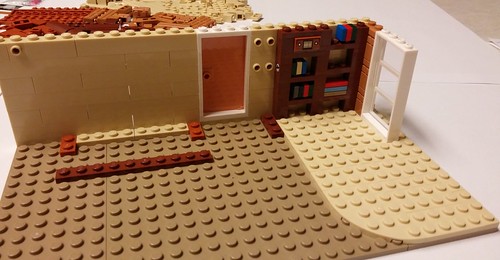 After making it through the "1" bags, the alcove is defined, and includes a desk. Interesting use of a revolver for part of the desk lamp. 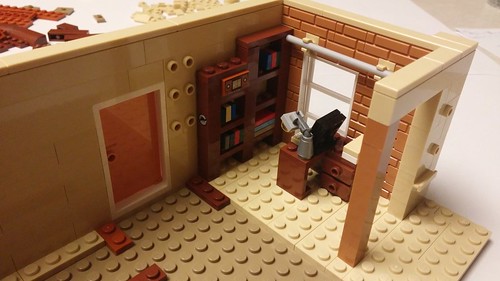 A little further along, the alcove details are finished, with dark blue curtains and helix model, and the ornate rug is laid out on the floor. 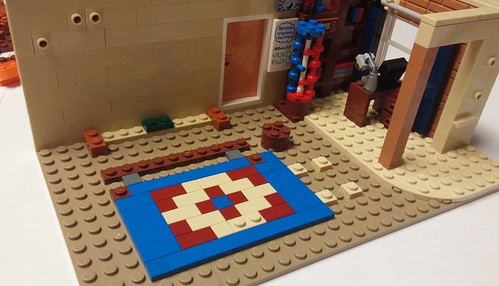 Just need to build the second shelf, couch, tables, and chair, then add some extra wall details to finish off the main room. 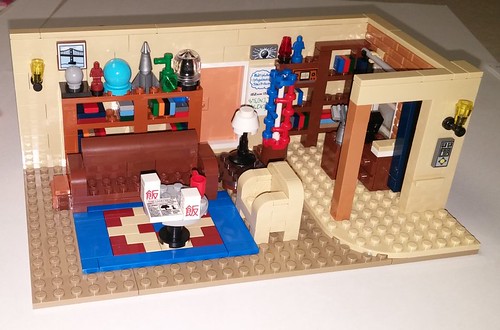 There are a few other accessories left to assemble:

While the telescope is supposed to attach to the floor, the marker board and small chair just kind of float outside. 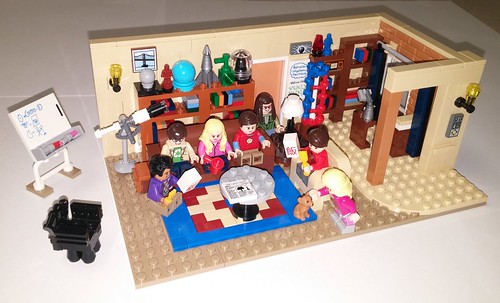 Here are a couple other views of the set...not much to see though. 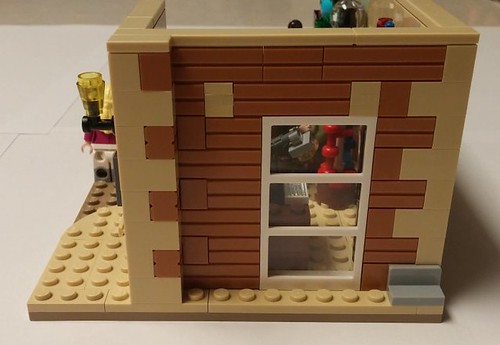 I had 58 spare pieces, which is more than 10% of the total advertised piece count. Only 2 forks out of all the kitchenware and 2 markers (lipstick) were actually used in the construction of the set so I'm counting them as spare. Two extra microfigs were a nice bonus, and there's even an extra revolver for when Leonard just can't take any more of Sheldon! 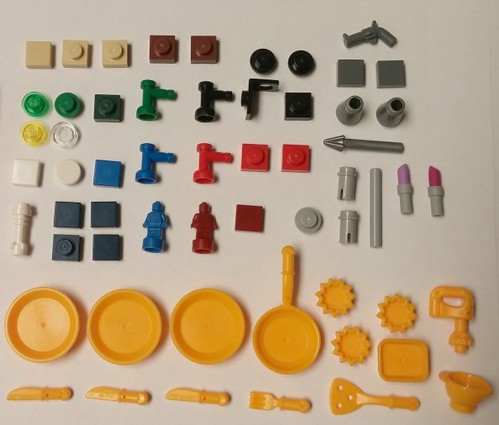 Total build time was about 1 hour and 40 minutes, with some pauses for picture and note taking. Also, I didn't apply the stickers, and I already had all the pieces sorted by color, so it may have taken a bit longer had they all been mixed together. The trickiest parts were lining up stacks of 1x1 tiles and plates for the shelves and assembling the DNA strand model.

Playability: 4/10
Being an AFOL, this purchase was strictly for display. That being said, with few movable parts, no action functions, and no vehicles, I can't imagine there even is much playability to it besides reenacting scenes from the show. If considering purchasing for a child, it seems they would really have to enjoy the show and know about the characters to have any fun with this set. However, if anyone has purchased this set for a child and they do enjoy it, please discuss in the comments.

Design: 8/10
This is a fairly accurate representation of what it's meant to portray and the Ideas project that it was based upon. From the white board with Sheldon's indecipherable Pictionary clue ("Higs Boson Particle", get it?), to the Chinese food boxes, there is a lot of detail in a small space. For comparison to the actual TV show set, refer to this article (it also features set details fans of the show may not even be aware of).

They did make a couple of odd design choices that were more accurate in the original Ideas project; for instance, the clear coffee table and the DNA strand model made of flexible hose pieces didn't make it into the retail version. (Lego did the same thing with the Back To The Future DeLorean model as well, in my mind failing to deliver what the supporters actually voted for.)

I would've liked the set to be another 6-8 studs wide to allow for the white board and black chair to fit on the floor and include the front door to the apartment for characters to enter and exit (are they supposed to go through the closet?). To go the next step, they could have made the kitchen area as well and hinged the set to open up...after all, the set does come with an extensive set of kitchenware. However, this probably would've at least doubled the cost of the already pricey set...

Price: 7/10
This set has 484 advertised pieces for $59.99, or about 12.4¢ per piece. Bear in mind there are 58 spares, which brings the price per piece down to 11.1¢, but still a bit higher than the desired 10¢ a piece. Though the higher price is most likely due to licensing and better quality instruction booklet/packaging, it's easy to overlook the value in these things when looking purely at price per piece.

Parts: 7/10
The bulk of the pieces in this set, shades of brown and tan, would work fine for making other buildings/interiors if one so chooses. There are a decent number of unique and rare pieces, though the usefulness of some in MOCs is certainly debatable. For instance, while the white board designs are a bit too specific to be used elsewhere, the 1x1 bricks with Chinese food design could easily be repurposed...just a shame this set only includes 2 of them. One minor gripe is that Raj's dog Cinnamon is actually a Yorkie, not a Chihuahua, and to my knowledge has never appeared in this apartment anyway.

The light blue sphere piece is meant to be a globe, and should have been painted as such to match what was proposed in the original Ideas creation. Similarly, the small gray sphere piece is supposed to be the Lego Death Star that Sheldon assembled and so it would have been great to see this painted as well. Although...having a Lego piece in a set based on a TV show where they built the real Lego set might be so meta as to cause the universe to implode...

Mini-figures: 8/10
Most fans of the show (who aren't already aware of this set) probably wouldn't be able to just pick up any given minifigure and say "Oh, that's Raj" or "That's Penny" as they could with any other licensed character, for example one based on a comic book or Star Wars. Nevertheless, the minifigures in this set are remarkably detailed with great colors and intricate patterns. From Howard's teeny tiny videogame controller belt buckle to Bernadette's star-shaped necklace, it's clear that a lot of time was spent on the design of these characters. Plus, you get all 7 primary cast members, each with 2 faces and printing on their backs. Any given head, hair, torso, or legs would work well for MOCs. Oh, and thank goodness they designed Penny before she chopped off all her hair!

Overall (average): 6.8/10
In closing, this set looks good on my shelf and is a nice conversation piece, and that's why I purchased it. But given the low playability coupled with a high likelihood to be unappealing to those who are not fans of the show, it's quite remarkable that this set even passed the Lego review process. In a way, it's sort of an unfortunate reminder that many great Ideas projects will never be available for sale simply because they cannot garner the 10,000 votes that licensed sets like these can attain through social media and "going viral".
Top

Thanks for sharing the review pro_zach! I missed this somehow earlier. This has been front paged. (:
Top

While I haven't bought this set for my nephew, I have been tempted. He's 8 and loves this show. He knows more about it than I do, though thankfully, I'm pretty sure many of the jokes just go over his head. He's a huge Lego fan as well, so this set would be right up his alley. What's really holding me back other than the price, is that he'd put it together once and then lose half the pieces but he'd love to have the mini figs to play with.
Top

I think the hairpieces for Amy and Penny are also available in the Collectable Figures line (Librarian and Mermaid, respectively)... though I may be wrong.

GREAT review! I enjoyed both the well organized photo's and your thoughts. Thank you!
Top

Thanks for the comments and promotion on the front page (I missed it amongst all the Black Friday hoopla)!
Top
Post Reply
6 posts • Page 1 of 1