Ok, so here is the second Prince of Persia set I'm reviewing. I have actually assembled 3 of the five, the desert attack set that I reviewed a while back, and another set that my daughter and I put together last month, The Fight For the Dagger. That is a nice set with some very nice new elements and very impressive mini figures, and a Camel. You should check it out.

Sadly. I was not nearly as impressed with this set.

Here is the front of the box.

And the back of the box. Note the graphic in the lower left, indicating Dastan has a reversible head.

The contents of the box. Instructions, 3 bags of Lego (not numbered) and the Ostriches, bagged separately. No stickers.

The cover of the instruction book, shows the race is on!

The ostriches are two pieces, the body and a head. The head turns, but the legs do not move. There is room for a mini figure to sit on the ostriches back. I was excited to see Lego ostriches at first, and these do look nice, if they don't do much else.

Here are all the pieces laid out and sorted. I don't usually do this, but since the set is relatively small and I had to open all the bags to put the mini figures together, I thought I do it this time. I don't see any new pieces AFAIK, except perhaps some new colourings, such as the battle droid arms. As a parts pack goes, this set is not very exciting.

The 3 mini figures. Prince Dastan, Ostrich Jockey, and Sheik Amar. Like Dastan, Sheik Amar has a reversible head. Interesting fact, Sheik Amar was played by Alfred Molina, who played Dr Octopus in Spiderman 2, and the guy who went into the temple with Indiana Jones at the beginning of Raiders of the Lost Ark (and got ran through by the spikes when he tried to steal the idol). So this would be the third Lego mini figure to be made of him . I think that would give him the lead in unique characters based on the same actor (Harrison Ford having Han Solo and Indiana Jones). Dastan is shirtless, and has apparently been working out. All the figures have nice patterns on them.

The backs of the mini figures.

Now, onto the build. There are three separate structures. First we have a weapons rack.

This must be where Sheik Amar stands to start the race.

The starting gate. I will say one thing about this set. My 4 year old daughter put the entire thing together herself. I only helped her one time. This is a remarkably simple build. Notice those 2/2 tiles with the one stud in the center? I assumed that the ostriches feet would stick on those. Well, you can attach one foot to one of them, but no matter what angles I tried, I couldn't get the other foot to go on the other tile. So I'm not really sure what their purpose is.

At this stage, you use two of the battle droid arms to attach the starting gates to the large bar that you pull back on to make the gates open. This was the only spot I had to help my daughter, those battle droid arms kept popping off on her.

And now we put in the ostriches and racers.

Pull the mechanism in the center back, and the gates open.

And the complete set. Who will win the race? Does anyone care?

Final thoughts. While it is a nice easy build, and does have ostriches, other then the shirtless mini figure chest that you can use to make your own surfer or pro-wrestler or what have you, there really isn't a lot here. The pieces are nothing special, the mini figures are ok, not amazing, and while I can't speak for children out there, I really can't see them having ostrich races all day long. I am glad that I got this on sale, as had I paid full price, I think I'd feel a bit let down.

I give it a 5/10.
Who is General Failure and why is he reading my hard disk?
Top

Wow I have to disagree with you on just about every point here. This is the second best set of the PoP line after Battle of Alamut and if they made this into an $80 set I'm sure it would be absolutely amazing.

First off the ostriches are like every other animal that LEGO produces, pretty much no moving parts but they're still new molds and new pieces. You also get TWO of them with this set. The camel you recommended from Battle for the Dagger doesn't have any moving parts. The ostrich at least has a head. 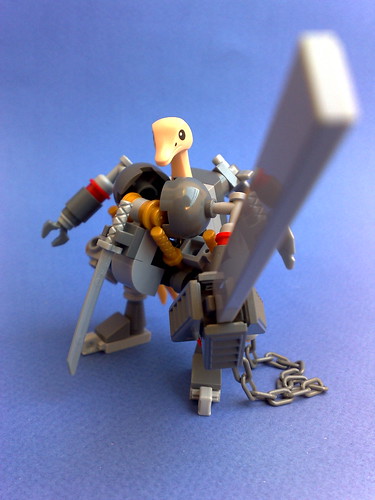 "I heard you've been criticizing me."

Secondly the parts that come with Ostrich Race are great. The pieces come in the new dark tan, regular tan and brown which are hard to come by in bulk in most sets. Also the dark brown tiles with the stud in the center were introduced with the PoP line, thus making them new pieces along with the Ostriches.

Thirdly I was able to get my ostriches' feet to hit both studs so I'm not sure how this isn't working for you.

Fourthly the minifigures are great. Yes shirtless Dastan takes the cake with his heavily worked out pectorals and abs but the other two minifigures have printing on both sides and are extremely detailed. The Sheikh also looks like Billy Mayes, which should be enough reason to buy this set alone. 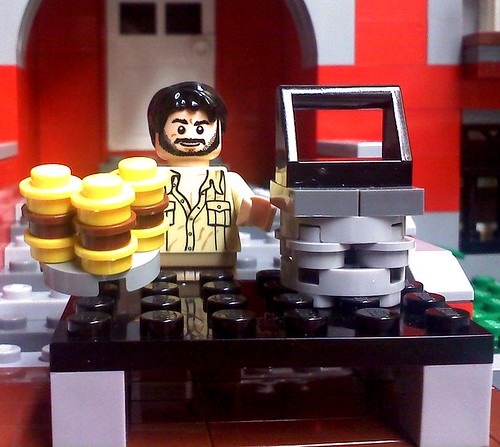 I don't think you gave this set a fair review. This was one of the best sets from the small PoP line.
http://www.eightclickbrick.com/ Find me here on the internet.

First, let me say I love your MOCs, that ostrich ninja is awesome, and the other one is fantastic too.

Secondly, a sets worth is in the eye of the beholder. I gave it a 5, which means to me it wasn't terrible, but it didn't blow me away. The ostriches are probably the best part of the set, and I wasn't criticizing them, I was just stating that the don't do much. Lego horses can only move their heads up and down, camels not even that. I'm not trying to knock any of them, just pointing out what they do or don't do.

I said I was a bit disappointed in the set, not that I hated it.

I bought this set since it was on sale for a good price, mainly for the parts. A lot of the parts don't excite me. That's all. I mean it has 12 brown "light saber" bars, to go with my like 40 others I didn't need. ;)

Also, my daughter who assembled it for me, liked the ostriches, but once it was assembled had no interest in playing with it. That also led to my lower opinion of the set.

If you love this set, that's great, and I hope you enjoy it for many years to come.

Hope this helps you understand my thinking on this set.
Who is General Failure and why is he reading my hard disk?
Top

Alright first I have to say that the first one isn't mine. I thought I had something in there saying it wasn't mine. The second one is mine. I do love me some Billy Mayes. That's about all I have to say really.
http://www.eightclickbrick.com/ Find me here on the internet.

Sorry to drag up a really old review, but I finally got to watch the movie last weekend, and this set now makes even less sense to me, as Dastan never rides an Ostrich in the movie, in a race or otherwise. Can anyone explain this to me?
Who is General Failure and why is he reading my hard disk?
Top

hatcher wrote:Sorry to drag up a really old review, but I finally got to watch the movie last weekend, and this set now makes even less sense to me, as Dastan never rides an Ostrich in the movie, in a race or otherwise. Can anyone explain this to me?

I would not question it. LEGO wanted ostriches and they gave them to us. I'm not complaining.

FYI Walmart has discounted this to $15 on clearance right now.
http://www.eightclickbrick.com/ Find me here on the internet.

decent set. amazon has it for 10$ which makes it a great set to have. Really I just want a few parts and the figs, will trade off the ostriches.
Top

ok first off I want to say that POP is AWSOME! Ok now moving on, this is not the best set I have it is the worst POP lego. The reasons why this set is bad is that it is wobbly,ostriches wont stay on the gate, the gate fence is a beast to put on, and it doesnt have enough to it. the on ly awsome things about this set are ostriches,scorpion(quite rare now), Sheik Amar and thats it.
Top
Post Reply
8 posts • Page 1 of 1

Users browsing this forum: No registered users and 26 guests