The LEGO Star Wars 7778 Midi-Scale Millenium Falcon is a set bigger than the mini but smaller than the UCS falcon. While this set has no minifigures, it is rather accurate to the movies. It is also an inexpensive way to get a millenium falcon without paying the UCS pricing of it. 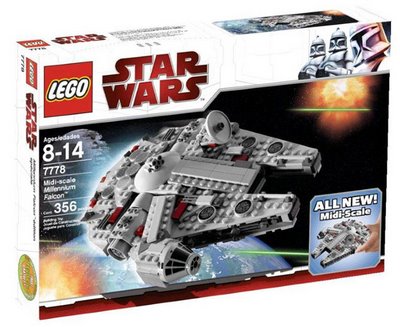 When you open the box, you get 3 polybags. One of the larger bags has 2 smaller bags inside making the set with a total of 5 bags of lego. Sorting took less than 10 minutes and the build took 45 minutes.

I was hoping there would be printed pieces with the overpriced pricing. To my disappointment, stickers are still being included despite it being a "limited edition" set. The hardest stickers to apply were perhaps the cockpit. 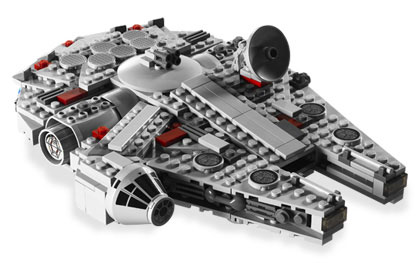 Design: 9/10 The Design is very accurate to the movies and is pretty solid other than the fragile radar dish which can come off really easy if you rotate it.

Build: 8.5/10 I give the build 8.5/10 because the building process is rather simple and there wasn’t any Technic bricks.
Playability 5/10 There isn’t really too much to play with. Its meant as a display piece. But there is a rotating radar dish, and laser canons on top and bottom. There’s also 6 landing gears and a nice engine at the back.

Parts: 7/10 This set would have deserved a 8/10 if there were no stickers. Nothing too special about the pieces in this set other than the translucent neon piece used for the rear engine and 2 new engine pieces.

Playability: 5/10 There isn’t really too much to play with. Its meant as a display piece. But there is a rotating radar dish, and laser canons on top and bottom. There’s also 6 landing gears and a nice engine at the back.

Value: 6/10 The price for this set is overpriced like most Star Wars Sets. The set is pretty small for the price you pay and has no minifigures.

Minifigures: No minifigures are included in this set

Overall, the Millenium Falcon makes a great display for collectors as its small and not too big. I personally wouldn't recommend it because of the price. The radar dish is fragile and comes off rather easy. This set would probably be the last set on your list if its for kids as there isn't much to play with by itself. Not the greatest set out there, but its an easy way to get a Millenium Falcon at an affordable price.
Toys N Bricks
A LEGO Fan Community. Like us on FaceBook and follow us on Twitter!
Top

I agree with you on the price. But with the sale they got right now, the value would become a 10/10 for me. Nice review and i look forward into building it when i have the time.
Top

Does anyone know where this set exclusive is to in the uk?
Top

Like others, this set is seriously overprice and theres no figures as well. But a sale on these would be nice.
Top

Tomatoe wrote:But a sale on these would be nice.

There was just a sale few weeks again at walmart for $25 which made it a great buy.
Top

I added a poll for this set. Please submit your ratings ! ;)
Top

Ice wrote:I added a poll for this set. Please submit your ratings !