Forgive the two different picture sizes. I didn't notice it until the end and I'm a little too tired to change them. The pictures can all be found on my Flickr. http://www.flickr.com/photos/legitalex/

Cashing in my paycheck I decided that I could spare a little somethin somethin for somethin nice. So after debating between this and the Kingdoms Prison Tower Rescue (Not to be confused with Prison Carriage Rescue, gee, super different names), I settled on this pimp set.


Ride in Brick Daddy's stretched limo, space out in style!

Brick Daddy runs his criminal crew from the luxury of his stretched-out space limo driven by Jawson. Equipped with super-cool space weapons and an escape pod, in case Brick Daddy and his gang need to make a fast get-away! Brick Daddy is one tough crook to catch...good thing the Space Police commandos are up into the space chase! Includes 3 minifigures: Brick Daddy, Jawson and Space Police Commando Limo features concealed shooting function, opening cockpit and escape pod Lunar Limo measures over 14" (35cm)

Picture of the box. Ooh and Aaah yourself. 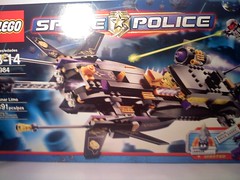 The box is pretty huge, which surprised me. This set just never struck me as being too big. No matter how much you read into the descriptions and see the pictures, LEGO never does a set justice.

You're not going to get a picture of all the parts before construction sadly. I was in a bit of a rush to complete this so I put it together before I thought about taking pictures (oops). Hit up Brickset or Peeron to look at the instructional page for the pieces. 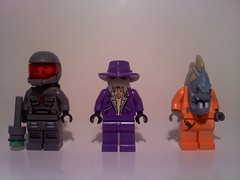 That's right. P I M P Brick Daddy. Purple Fedora, purple pants, fur lined suit. We are talking gaudy to the pimp extreme. All he lacks is a cane. Jawson is quite a figure by himself. He comes in a prison outfit, complete with a shank in the pocket. This body will be used over and over again in City themes from here on out, I guarantee it. The space police is typical of the 2010 Space Police line. Nothing to see here. 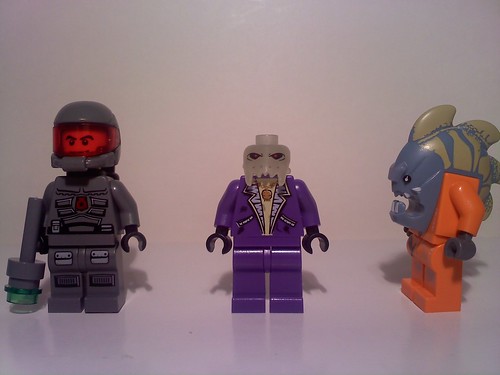 This picture should give a better indication of what the minifigures are like. Jawson's head is one piece. The chin really does slide down to his pants and you can fit anything that fits in a minifigure's hand inside of his mouth. The head of Brick Daddy is kind of small but its completely intentional. Double sided Space Police head.

Now, feast your eyes on this beauty! The Brick Mamba, as the license plate christens it (sticker, not shown here) 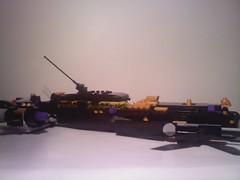 Its so big I can't fit in my camera view. 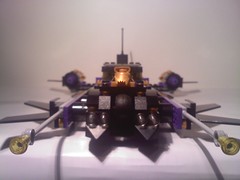 Yes, that's another head on the front of the car. Pure gold, no printing. 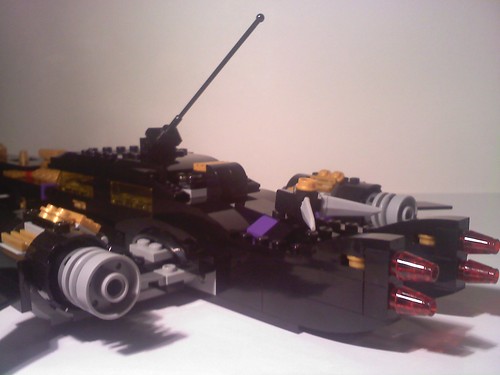 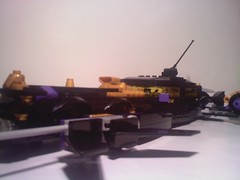 The car is decked out in 'features,' so to say.

First off is the trunk. 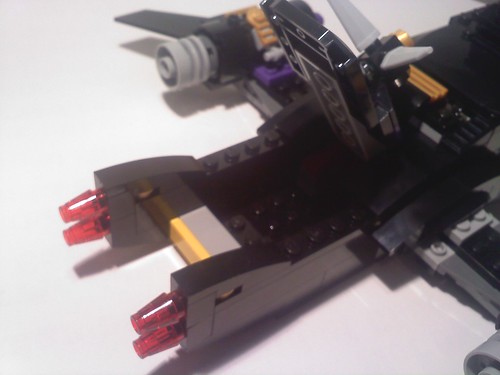 Oooh and ah. I know what you're thinking: So what, its a trunk. I can store a spare in there. Well you can store much more... 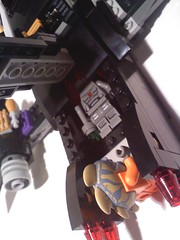 "One less Space Policeman to deal with."

Then there's the main 'cannon,' a Technic launcher. The golden piece in the middle of the engine is the trigger for it. 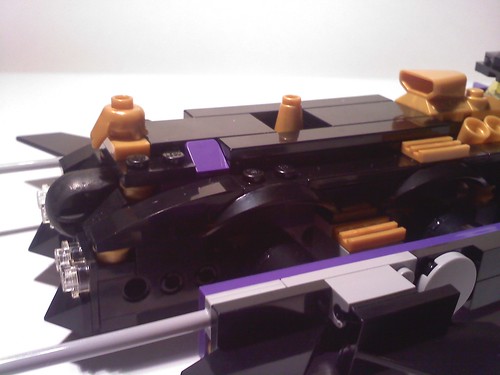 These things pack quite a punch.

The engine pops up, revealing the golden glory. 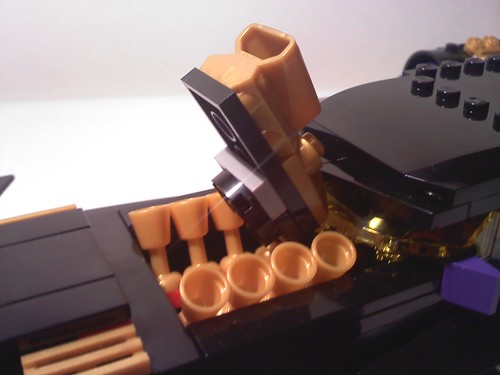 Yes, those are 8 golden goblets. I was shocked too. 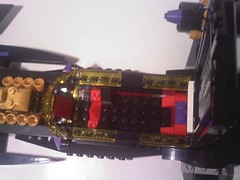 Now here's the cabin on drugs (or drug dealers. I can only assume what these criminals are up to). 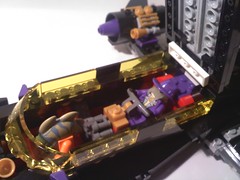 Jawson fits comfortably inside as the driver and Brick Daddy fits inside on his gun turret vehicle that pops out. It's really not too impressive, so I'm not going to take a picture of it. It's about 10 pieces, 4 pieces being the binoculars.

Surprisingly this set came with a lot of extra pieces, big ones too. Another antennae? Really? Not that I'm complaining. The extra visor is very nice as usual 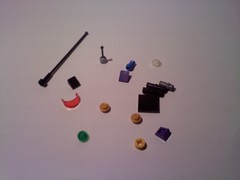 So here we are, down to the final say.

Would I recommend you buy this set?

Yes. 100%. You have to look for faults with this set and they're far and few between.

What are these far and few between faults, oh wise one?

1. The trunk doesn't close all the way when the minifigure is in there, just most of the way.
2. The gunship's binoculars break off when taking the ship in and out of the limo. It's really annoying.
3. Ummm...There are no accessories for Jawson and Brick Daddy. It's a really lame con, so you might as well ignore it.

So there are a ton of pros right?

1. There is an insane amount of pearl gold pieces. 8 goblets, multiple vent tiles, multiple circular studs. The engine and the semi flat piece behind it to boot.
2. The design is amazing. This looks so gangster. The designers were spot on. The ship is also set up that if you really wanted to you could pop off the side wings and easily put some wheels on and turn this into a regular limo. I was tempted but I don't have the right size wheels.
3. Brick Daddy. He's exclusive to this set for now and he is amazing looking. He is unique in every way except for his purple pants. The minifigure has printing on both sides, his face is new and his hat is a PURPLE FEDORA. Jawson comes in two other sets but he is still a great minifigure to have.
4. It is a sturdy ship. It's nearly 15 inches long and it does not bend or break apart.
5. Good price per piece.

I can't think of anymore. If you are like me you've already fallen in love with it from just looking at it.

Go out and buy it.
http://www.eightclickbrick.com/ Find me here on the internet.

You forgot to mention one of the biggest PROs: TRANS-YELLOW WINDSCREENS/PANELS!!!
ALL HAIL THE BLACTRON EMPIRE!


And trans yellow windshield/panels. For all those classic space fans.
http://www.eightclickbrick.com/ Find me here on the internet.

Awesome review. Did anyone notice Jawson is in every other new SP set?
Top

Tomatoe wrote:Awesome review. Did anyone notice Jawson is in every other new SP set?

I did, which made me go 'what the heck' when I saw it. He's a pretty cool minifigure. He has a desirable minifig chest and his head is unique as far as Space is concerned. I'm not too bummed about it, but it absolutely leaves me with no desire to purchase the Undercover Cruiser set. Why would I want to spend $30 for Jawson and a Space Policeman when I could have Jawson, a Spacepoliceman and Brick Daddy in this set for $10 more?
http://www.eightclickbrick.com/ Find me here on the internet.

legitimatealex wrote:Why would I want to spend $30 for Jawson and a Space Policeman when I could have Jawson, a Spacepoliceman and Brick Daddy in this set for $10 more?

Seriously, though, 'Jawson' is the 'Snake' of 2010.
ALL HAIL THE BLACTRON EMPIRE!

Don't insult Jawson like that. He's a cut above.
http://www.eightclickbrick.com/ Find me here on the internet.

I actually really like Snake - while he's distinctively alien, his face still has that classic kind of LEGO smiley to it - other aliens just look menacing, whereas Snake looks ecstatic to be alive - and why shouldn't he? He has, like, four different vehicles to choose from! ;)
ALL HAIL THE BLACTRON EMPIRE!

None of those vehicles were even close to this smooth piece of space machinery though! He also never put on a darn shirt. It must be super cold in space without one.
http://www.eightclickbrick.com/ Find me here on the internet.

Tomatoe wrote:Awesome review. Did anyone notice Jawson is in every other new SP set?

I did, which made me go 'what the heck' when I saw it. He's a pretty cool minifigure. He has a desirable minifig chest and his head is unique as far as Space is concerned. I'm not too bummed about it, but it absolutely leaves me with no desire to purchase the Undercover Cruiser set. Why would I want to spend $30 for Jawson and a Space Policeman when I could have Jawson, a Spacepoliceman and Brick Daddy in this set for $10 more?

$10 for Brick Daddy is expensive for a figure but I understand your reasoning. The undercover cruiser looks just as cool as the limo with the transformation so other people may want it.
Top

Thanks for posting the review. Set looks great!
Top

lego should send you royalty checks! i just bought this earlier today after i read your review last night. ;)

wait.. no... not "after" but "BECAUSE" of your review. yes. they definitely should send you some kick backs. or would that be... brick backs. <drum snare>
Top

Haha I think this is what every reviewer loves to hear. Thanks for your feedback. I need more money for more sets : p
http://www.eightclickbrick.com/ Find me here on the internet.

I just picked up this set yesterday, and I have to say it is a very impressive and my favorite Lego space set to date. I was hesitant about this set for the longest time and after reading a couple of reviews about it decided to pick it up and am not at all repentant at having bought it. Very nice and long space ship. My only problem now is where can I put it as it's a long limo.
Top

Seems to be a good value set (compared to star wars) with nice purple pieces and unique figures. Thanks for the review!
Top

Such an old review for me! This seems like so long ago. I'm very glad it is still helping though. I will forever have a use for a purple fedora clad minifigure.
http://www.eightclickbrick.com/ Find me here on the internet.

Playing with LEGO when I can. Where does the time go?
Top
Post Reply
16 posts • Page 1 of 1

Users browsing this forum: No registered users and 7 guests