A new LEGO City Train set has been revealed courtesy of Brickset. It appears there are 4 minifigures in this set and a variety of track pieces including the flexible ones. No information on price or release date yet.

The box art for LEGO City 3677 Red Cargo Train has been revealed courtesy of BrickInside. After seeing the size of the box, I don't think LEGO will make this set that much cheaper compared to 7939 Cargo Train. Thanks to prideprince for contacting us with the news! 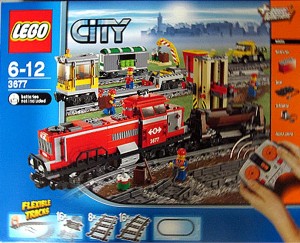 There is also a Youtube video of the train: http://www.youtube.com/watch?v=hJhWsSV8 ... r_embedded" onclick="window.open(this.href);return false;

I had thought this train set has not been released yet.
My First MOD
My Jabba Palace with Rancor Pit Resizing
Top

I had thought this train set has not been released yet.

This person/company seems to get new set early. They were the one who was the first to post a video of the 10219 Maersk Train.

I think it may be cheaper.. The 7939 Cargo train has switches, this set does not... Not sure if they are offsetting that by adding more of something else, but it is really bizarre as the 7939 came out last year if I am not mistaken...
Top

I wonder what other differences there are between 7939 and 3677.

http://www.toysrus.com/product/index.js ... d=11815467" onclick="window.open(this.href);return false; (if it loads)
I have inoperable cancer and am unable to work. Any gifts would be appreciated. Thank you!
Top
Post Reply
9 posts • Page 1 of 1

Users browsing this forum: No registered users and 27 guests