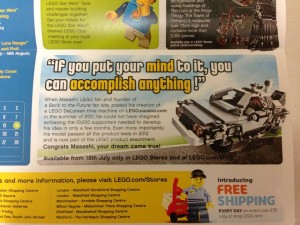 The official picture for the 21103 Back to the Future DeLorean Time Machine has finally surfaced from the UK July 2013 LEGO Store Calendar via BrickFanatics! This creation was originally posted at the Cuusoo website back in 2011 which achieved 10 000 votes for evaluation. After a series of assessments and tests by the LEGO Group in 2012, the product passed. Congrats again Masashi! On July 18, 2013, you can purchase this official LEGO product at LEGO Brand Stores and LEGO Shop at Home.

Though, it does appear that there’s been some modifications to the original Cuusoo creation that was posted. There are no minifigures in the “official” LEGO product and the vehicle also appears to have been modified as well.

Original LEGO Back to the Future DeLorean Time Machine Creation 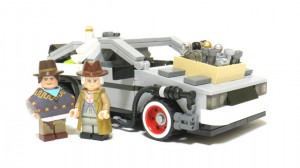