An eBay auction has revealed the 2015 Star Wars Celebration LEGO set. It is a Tatoonie Mini LEGO Star Wars set which will be available in Anaheim, California later this year. This would most likely be a special promotion or giveaway set. The limited edition set consists of a sandcrawler, a landspeeder, several microfigures and a Tatoonie landscape. A standard sized C-3PO minifigure is also included. (via Eurobricks) 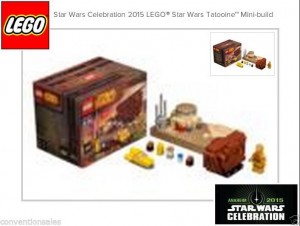